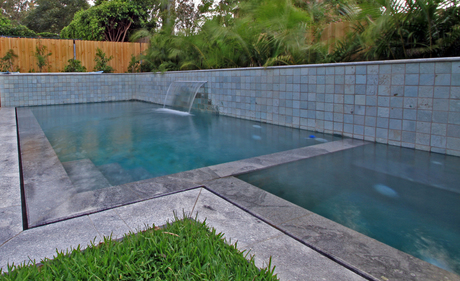 The clients of a Manly beach house wanted to create a tropical urban oasis inspired by the resorts of South-East Asia. The brief given to the Land Forms design team was to transform the small and seldom-used backyard into an extension of the internal living area, creating a new space for both entertainment and relaxation.

The Land Forms design team was also engaged to come up with a landscaping concept for the entire block to tie the new additions seamlessly into the rest of the outdoor areas. This required a complete re-imagining of existing surrounds in order to create new multi-use areas and improved functionality. This project was suited to a poolscaping approach because the landscaping and pool building works were so intimately linked.

Land Forms prepared and lodged the development application submission to council for the new pool and spa, covered decking pergola off the living area, carport extension and associated retaining and landscaping works. The benefits of combining the pool construction with the landscaping of the site were already realised during the design phase; however, it was during construction that the benefits became especially apparent.

Tight site access made it absolutely critical that construction of the pool was done in conjunction with, and consideration of, the surrounding landscaped areas. The site was fully cleared and the synergies of completing the pool and landscape job were evident. During the excavation for the pool, the site drainage, services and structural retaining walls were excavated and constructed. A stormwater absorption pit was also excavated under the adjoining turf area simultaneously, representing significant time and cost savings.

The pool structure itself was linked into the surrounding landscape elements. The wet-edge style creates a seamless look between the pool and spa and the surrounding tiled and turf garden areas. The wet edge of the pool required a concrete ballast tank to be constructed to handle the displacement of water, which was also designed to act as the structural footing for a new brick shed. Access to the tank, including pool and spa equipment, is concealed under the shed floor, allowing the remaining space in the shed to be utilised as much-needed storage for the growing family.

The pool and spa were fully tiled using large-format, natural blue stone tiles sourced from Bali, which required a unique build approach to accommodate their scale — the pool was built without any radius in the corners or flooring, meaning all joins and angles are entirely square. Granite stone was laid to all seat and step areas, as well as on either side of the wet edge coping, to create a beautiful visual and textural contrast to the blue stone tiles of the pool interior.

While the pool construction was being finished, the remaining landscape works were also completed. This included an extension to the internal living area, with a new covered deck and alfresco area. The pool fencing requirements and level change from living area to the pool level were solved by the design of the new deck, which incorporated informal seating with built-in storage steps and garden planter spaces.

Because Land Forms was responsible for building the entire project, there was no crossover between contractors and the overall project timeline was reduced. The benefits of approaching the pool and landscape as one project were realised through the entire process of design and construction. By approaching the site as a whole, the pool was seamlessly integrated into the landscaping, becoming a part of the overall garden instead of a feature in the garden. The result is a private tropical oasis, both luxurious and practical; a small slice of tropical resort life in Sydney which will be enjoyed by the family for years to come.