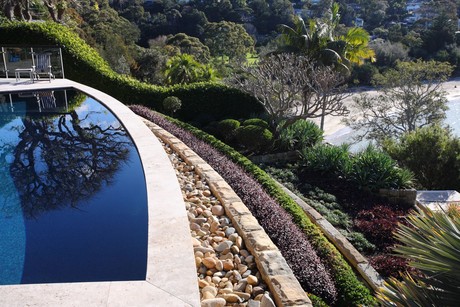 When you are blessed with such a breathtaking waterside location, you need to do everything you can to maximise the view and ensure a seamless connection between house, garden and water’s edge. While this property overlooking Sydney’s Middle Harbour had amazing views, turning the site into an easy-to-navigate landscape wasn’t as simple as it seemed.

The brief from the owners appeared straightforward enough to begin with: they wanted to be able to get from their house located at the top of the site to the boatshed and shoreline at the bottom as comfortably and safely as possible. What evolved over the 18 months it took to complete the project was nothing short of a masterpiece in modern landscaping — and a lesson in ingenuity. 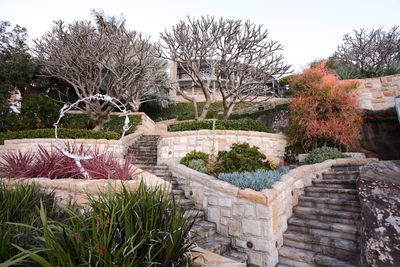 The sheer scope of the project meant the design had to be constantly adjusted and the construction processes regularly reassessed by John Storch from A Total Concept and Nick McCarthy from Urban Escape Landscapes and Pools as they worked their way down the precipitous site.

“The scope and detail of this project is what makes it special,” said McCarthy. “Being 1800 m2 and an incredibly rocky and steep waterfront site meant that access and manoeuvrability were always going to be issues. Barges were organised to remove waste and bring landscaping materials such as bricks, sandstone, soil and cement to the site.

“One crazy day in Urban Escape’s history of landscaping saw a barge in Middle Harbour being held in place by a tugboat with a helicopter hovering above. The helicopter placed the large mature trees, which included frangipanis and palms, in the prepared spaces on-site.” 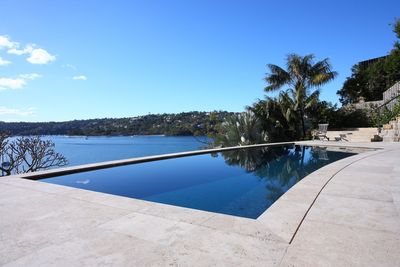 The landscape was basically built from the top down, with steps, pathways and landings evolving to suit the contours of the site. Sandstone was extensively used for the hardscaping elements, chosen because it is a hardy material that will survive, despite the harsh, exposed conditions, for many generations to come.

“The plant choices also needed to reflect the site’s location and climate,” added McCarthy. “They needed to be as hardy as possible, given the fact that the site was on a north-facing cliff by the sea. We introduced large bottle trees, mature frangipani, Kentia palms, kangaroo paws, Mauritius hemp, cordylines and lomandra, all chosen to add colour while still being able to withstand the harsh conditions.” 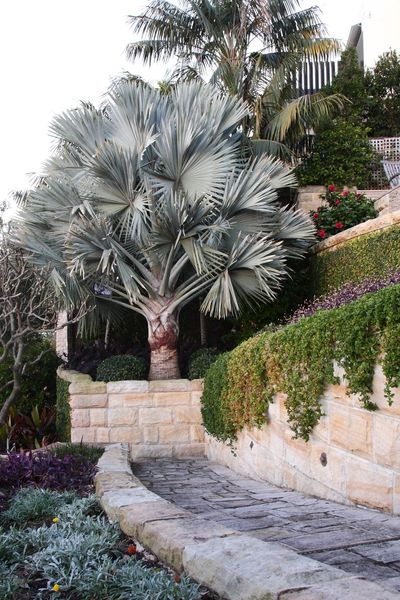 Urban Escape’s final task was to restore and extend the seawall and boat ramp. This involved manoeuvring a 1.5 m palm out of the way so the final set of stairs could be installed. Now, not only do the owners have a beautiful garden that effortlessly links the house with the shore, they have a garden that is an award winner.

In the LNA Master Landscapers Association Landscape Excellence Awards 2015, Urban Escape won the Residential over $300,000 category and received the Graham Ross Residential Landscape Award for the construction of this coastal classic. 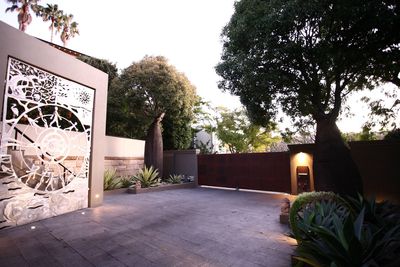 All images courtesy of Urban Escape