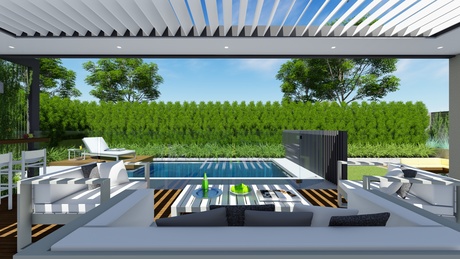 When your client signs a contract with you, they are placing an enormous amount of trust in you and your team. They’re allowing you to come into a space that is normally reserved exclusively for friends and family. You may not think much of that, but it’s actually a really big deal.

If someone trusts you enough and feels comfortable enough with you to part with their hard-earned money, respects you enough to listen to the advice you’ve provided and is willing to let you make physical changes to their personal space, that’s a huge shift for them! You’ve obviously done a great job building rapport, communicating effectively and showing empathy and compassion.

To have built a relationship of this kind with someone is a big deal for your business, too, because it’s also the first step toward earning word-of-mouth referrals. I use the term ‘first step’ for a good reason.

Once you’ve got yourself a signed contract, from that time onward, everything you do will either make or break your chances of your clients offering a trust-loaded personal recommendation of your business to someone else in their network.

As the owner of your business, no doubt you are the most charismatic and the most passionate one in it. You know what you stand for and your actions reflect your attitude, because your reputation and your livelihood are on the line. You’re the first to bend over backwards to ensure your clients are happy and having a good experience, and want to be the first to know when they’re not having such a good time so you can implement the necessary changes.

But what about the rest of your team? What about subcontractors that work under your banner? Do they carry the same attitude? Are they as concerned about your reputation and as proud of your business as you are? When you’re not on-site, could their actions potentially harm the experience of working with you (and, by logical extension, your business)?

Absolutely! You can do your very best to instil your values in your team; it’s the great skill of any noble leader. But what do your clients see when they peer curiously out the window at the progress you’re making? How do they ‘see’ you and your business when your team has left for the day and they’re tiptoeing around outside after work?

Besides the framework for the decking, they see the little things. And those little things, those ‘habits’, as I’m going to refer to them, could be killing your opportunity to earn quality referrals.

These habits are things your team and your subcontractors might be doing without realising it. And they don’t realise it because they’re not focused on giving your clients a positive experience. Right or wrong, they’re focused on physically getting the job done, getting paid and getting out of there.

Be a fly on the wall

I want you to imagine you’re the client. The way you see the project is a little like a time lapse camera; your view of the project is intermittent rather than continuous.

Sometimes people who weren’t there before have suddenly appeared; sometimes someone who was doing one thing is all of sudden performing another task or has disappeared altogether. When you go outside for a walk around the site in the evening, the job feels noticeably different than this morning because you haven’t seen it for a while.

Seeing a project unfold in this way can be a bit confusing because you don’t get the whole picture. But here’s the thing: it also means you would probably pass judgement on what goes on between observations, based on what you see at the time you’re having a look.

If that makes sense to you, then you’ll agree with me that being seen doing anything negative at all, even just once or twice, can have a dramatic effect on the perception of what might be happen generally.

On that note, here are five on-site habits your clients might be seeing that could be killing referrals for your business without you even realising it.

1. Always on the damn phone

It’s not an office job, so landscapers are usually allowed to take short calls during the day from their partners or family. But what about the guy who’s leaning on the fence blatantly browsing Facebook, or the girl smirking while she reads through an epic conversation among her friends? This increasingly prevalent habit says a lot about your work ethic, and not in a good way.

It’s not that people aren’t supposed to have a life, but you’re running a business, and the real boss for the next eight weeks is watching everything from the kitchen window and not impressed.

This is such a no-brainer and so easy to avoid, yet I can’t begin to tell you how many times these dirty little remnants have come up in conversation with my clients. Either ban your staff and subcontractors from smoking on-site at all, or at least provide some sort of receptacle for them to put their butts in. It’s not just the butts that are the problem: consider where the smoke goes, too. Laying pavers under an open kitchen window with cigarette smoke wafting its way in and all over lunch won’t be earning anyone a cold drink or a cup of tea on the break.

There is nothing more disrespectful than using someone’s home as an ashtray; except perhaps for…

3. Using the garden as a toilet

Your staff have a right to relieve themselves at work. It’s up to you to arrange the facilities to do so and to create and enforce the rules around where to go to do so. Inside the house is ideal, and a portable toilet would be an option if the job’s big enough. But if neither of these are possible, instruct your staff to resist the temptation to use a tree, the fence or the ever-popular ‘down-the-side’ venue. Seek out a nearby shopping centre or public toilet block instead and make sure they ‘go’ there.

Your staff are all adults and supposedly toilet trained; don’t risk a grown man on your team being spotted (by sight or smell) using your client’s favourite tree as a toilet.

Your client’s home and has made everyone a cool refreshing drink to show appreciation for the hard work they’re doing on such a hot day. She walks outside with the tray to discover everyone has inexplicably disappeared. Four hours later and still no one has returned to the site. Her husband comes home and wonders why the garden looks almost the same as it did this morning.

In fact, the team was called away because the irrigation had burst at a project down the road, but no one kept the client informed. Another common client complaint is waking up in the morning to see no one from your team on-site, but someone they’ve never seen or met (a subcontractor) wandering around the backyard without even having knocked. Just as you’d want it in your own home, always make sure your client is introduced to anyone you bring onto their property, whether personally or in advance by phone.

Keeping clients informed is incredibly important yet so often overlooked. Keep them up to date even on the smallest things: when you’re leaving the site, when you’re returning, if there’s been a problem with the job and when you’re expecting someone different on-site.

I honestly believe only 50% of landscapers do this (in other words, half of them don’t clean up each day). Cleaning up doesn’t mean putting your tools back into the truck and driving away; it means sweeping up, removing rubbish and rubble, or building a pile and covering it with a tarp for removal later.

A messy worksite is what people expect, thanks to the other half of you. A clean worksite is a pleasant surprise and says a lot to your client about the way you work, your whole approach to delivering the project and, above all, the respect you have for their home.

To your team it’s the job site, but make sure they’re aware at all times that you’re in someone’s home and are very fortunate to have been invited there in the first place.

Take the lead on this stuff

Sometimes, it’s little things like these that slide when the going gets heavy. Long days, too many spotfires to control and your whole team is knackered.

At the same time, remaining vigilant on the little things is exactly what’s going to earn you a shining recommendation because, quite simply, you’re not like the ‘rest of them’. Your client’s perception of you has been shaped by those that have come before you as much as it has by your website, your conversations and your personal appearance.

Use this as an opportunity. Be the landscaper who’s different! Make it a point to let them know you believe in a smoke-free worksite, that all your guys are fully house-trained and that they will leave the site in a tidy state each day.

Ask your client to let you know privately if there have been any slip-ups. That way they’ll feel they’re supporting you, rather than complaining to you, and that’s only going to strengthen your honest relationship with each other.

Have your say: Have you identified and overcome any bad habits that were damaging your reputation?

Shah Turner is the founder of Pitch Box, the world's leading on-demand service provider of affordable 2D and 3D drafting solutions tailored to help business owners win more work in less time with minimal input. Small to mid-size businesses who want to retain a compact, flexible structure now have the ability to provide their clients with quality 3D renders, impressive fly-throughs and professional CAD drawings with no in-house design staff and no software experience necessary. You can learn more by visiting www.pitch-box.com.

How the IIoT is helping solve global water and wastewater challenges

Plant extracts found to be active against SARS-CoV-2