A return to glory 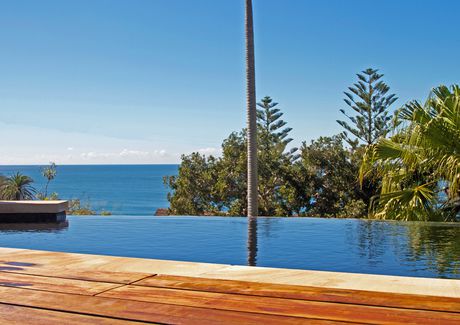 Situated high on the hill of Palm Beach in Sydney, with 360° views over Pittwater and the Pacific Ocean, this 1930s house was once a jewel in the crown of the exclusive northern beaches suburb but had long ago lost its original lustre. Thankfully, through the vision and dedication of its new owners, the gem was saved from demolition and restored far beyond its former glory.

The poolscaping project started under ideal circumstances; it was conceived in tandem with plans to renovate the house, which meant a clear and collaborative relationship with the builder (Country Constructions) and architect (Bentley Vitale Design) from the very beginning of the design process. This ensured a consistency and seamlessness in the overall function and aesthetic of the site.

The clients’ design brief to Land Forms was to create a year-round family retreat, connecting the pool to the landscape so that it served as much as a visual feature when it was not being used.

It offers something from every angle — a visually stunning water feature viewed from the entertaining deck and the reflections of light and ambient sounds of the spillover wall enjoyed from the fire pit.

The design makes best use of a steep slope and is built up into individual entertaining spaces across various levels including the pool area, a fire pit, lawn, mounding and curved retaining walls which respond to existing topography.

The Land Forms design team created a concept based on the microclimates of the site and the flow of movement. This determined the position of the pool and structural landscape features, which create usable rooms and interesting perspectives.

The first stage of the construction was extensive site clearing. The existing site incorporated an old tennis court slab that had cracked and the entire garden was overgrown with large tracts of invasive bamboo and other shrubs and trees.

The site required extensive clearing before the project could commence.

Preservation of heritage was a key component to the project and the extensive excavation revealed the original source of sandstone used to build the house, as well as others in the area, in the early 1900s. The stone matched the colour and banding of the stonework in the original dwelling, which was cut and squared into 100 mm thick veneers on-site and then fixed to the garden and pool walls in a random ashlar pattern using stainless pins and epoxy.

The new landscape was to be constructed in a land-slip and fire hazard zone, which required special engineering considerations. Structural retaining walls were constructed to support the site and the existing house perched above the garden using 300 mm series concrete blocks.

The design makes extensive use of sandstone to match the original dwelling.

These walls were built on cantilevered concrete footings with machined, N16 hot-dipped galvanised steel reinforcement. The footings were keyed and chemically anchored into the layers of machine-sawn levelled bedrock. Excavators from 1.5- to 12-tonne were engaged for the bulk excavation and rock sawing required.

The pool shell was formed using suspended plywood shutters to achieve the desired curve of the infinity edge pool wall and ballast tank. The engineering requirements required 3 m deep concrete piers to the extent of the pool. The steel reinforcing for the pool shell involved a double cage (top and bottom) of S12 bars at a 150 mm grid. Special care was taken using an added pressure shotcrete applicator and a carefully selected slump mix of concrete to ensure full cover was achieved around the tight steel reinforcing cage. The result was a pool free of honeycombing throughout, which was vital considering the proximity to the ocean.

Some of the more subtle, yet equally defining, characteristics of the project included a hand-carved foot basin for the outdoor shower and a curved fire pit area. Large irregular offcuts from quarry blocks were sourced to match the house stone colour and these irregular slabs were cut and carved by hand on-site to build the garden stairs, paths and stepping stones. Land Forms was also engaged to clad sections of the house as part of its renovation and also dismantled and rebuilt the chimney of the original house.

On the upper western side of the garden, diamond sawn slabs were used in a more formal layout for stepping stones and paved terraces. The driveway and patio flowing out from the house was constructed in a mix of concrete finishes. Polished concrete with a slip-resistant topping was used to tie the patio area in with the house and sawn stone slabs were used as capping and also honed to give a seamless finish. The driveway was finished in exposed aggregate to give the required slip resistance but also to tie in visually with the adjoining patio area.

The poolside deck was built using custom profiled Iron Bark decking boards. The boards were cut with a 3 mm ‘cricket bat’ profile on the top face to ensure water would run off, and all stainless bugle fixings were concealed using plugs from the same timber.

The soft scape included large quantities of soil conditioner across the 1500 m2 site. Plants and a fully automatic irrigation system were installed to all garden and lawn areas, along with a 10 m2 green wall constructed to screen a neighbouring dwelling. Land Forms’ maintenance team continues to maintain the garden, which should continue to improve over the coming years as the plants prosper.

The client feedback says it all: “The integration of the landscaping and pool into our overall design scheme and timeline was integral to the success of the project. The end result references and complements the heritage aspects of the house while still delivering a timeless, functional and spectacular outdoor amenity.

“We can’t speak highly enough of Julien and the Land Forms team. Creative, hardworking, professional and willing to explore all alternatives to deliver the best possible result.”

Since its completion, the project has been nominated for the 2015 Master Builders Pool and Spa Award.