Enclosure as alternative to indoor pool 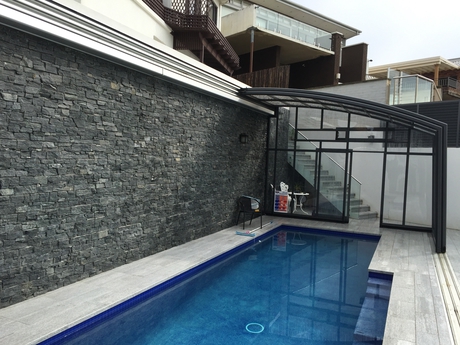 Joy Lucas found inspiration for her pool enclosure in an unlikely place: a National Geographic magazine.

“Archaeologists were trying to preserve a dig site, so they enclosed it in one of these enclosures with a retractable roof. And you go in there and they open it up and you wouldn’t know it was there. And at night, or if it’s raining or anything’s happening in winter, they close it back up,” she said of the first time she saw a pool enclosure.

Wanting to install an indoor pool on her sloping block, Lucas’s plans had been stalled by fussy neighbours who complained about her plans to build a permanent structure on the waterfront property.

“We went through everything with the council and we couldn’t get it passed. And in the end I thought, no problem, I’ll look elsewhere,” she said. It was then that she came across the National Geographic magazine.

“And I thought, ‘I wonder if anyone does that in Australia?’ I went looking and I found a company in Queensland that did something similar, and also The Pool Enclosure Company. I contacted both of them and James [Hutchins, TPEC’s CEO] just beat them by miles,” she said.

Lucas’s susceptibility to skin cancer (she’s a redhead) ended up being a positive, with her skin cancer specialist sending a letter to council stating that she needed a UV-blocking cover over her pool to protect her skin. TPEC’s enclosures block 97% of UV, making them perfect for Lucas’s requirements. While the pool and enclosure were eventually approved, the approval was quite restrictive. “But James just worked around it,” said Lucas. “He was fabulous.” 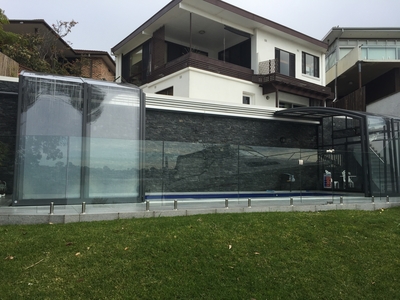 Lucas and her husband worked closely with Hutchins to design the enclosure to suit their needs, deciding on doors at either end and windows at the top, along with multiple retractable sections, allowing them to completely open the structure if they desire. They chose the CORSO Lean-to model — the first installation of this type in Australia.

As the pool is heated using a combination of solar and fossil fuel (in this case, gas), under NSW law, it required a cover. However, Lucas wasn’t keen on pool covers after her experiences using one on her brother’s pool.

“That’s where I learnt the hard way about what I had to do with pool covers. Every time I used to turn that wheel and bring the cover up, the leaves used to go off the cover into the pool anyway half the time. I have arthritis in my hands and just found it a bit hard to use,” she said.

“And they weren’t cheap anyway. I looked into those electric ones that drop down and you can’t see them. They were expensive. They were $8500–$10,000 for what I wanted.” 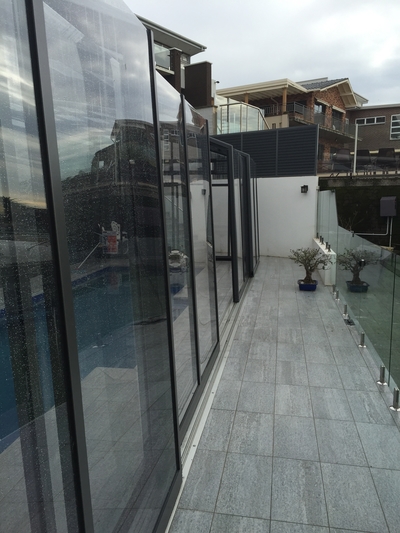 While an enclosure might seem more unwieldy than a cover given its size, Lucas says it’s anything but. She has no troubles opening it, even with the arthritis in her hands.

“I do it with one finger. I have arthritis really bad. I get injections every three months. And I said to James, ‘I think I’m going to need an electric thing on it to open it up’,” she said.

“But I can open it with one finger. I can be in the pool — you know how you heave yourself up on the side of the pool — and I’ll just give it a push and it just slides along.”

As far as maintenance goes, Lucas says there’s hardly any to be done. The pool cleaner spends more time hanging on the wall in the pool shed than it does in the pool.

“I put it in about once every three, four weeks and I leave it in for two to three days, max,” she said. “We have no maintenance; we do nothing. We only sweep up around the enclosure — the outside of it. We don’t have to clean anything.”

Heating costs for the pool have been far less than Lucas expected. “It cost me an extra $200 on my gas bill. That’s it. For the whole of winter,” Lucas said.

While a pool enclosure wasn’t quite what Lucas and her husband initially envisioned, they’ve been thrilled with the results. “Enclosures aren’t cheap, but I would never, never have a swimming pool without one again,” she said. “Everyone who sees it wants one.”

CleverDeck composite decking is an environmentally friendly alternative to timber.