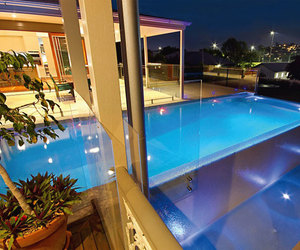 From leaking seals and cracked lenses to blown globes that are all expensive to replace, the standard pool light has been given a reputation of being unreliable.

Glow & Flow Lights, an Australian maker of LED pool lighting, offers the Glow & Flow Echidna Replacement Globe with Lens using the company's patented system of having the globes in the water and not behind a clear ripple lens. Waterproof, it doesn't matter if the light seal leaks and the body fills with water. The light and colour of the LED is not muted by the old, usually dirty, clear lens or a faded coloured cover. The Echidna RG with Lens can be fitted into most popular brands.

LEDs have come a long way in the past decade and now rival the old 100W globe for brightness. Clients like the even glow of LEDs throughout the pool compared to the light a standard lamp.

The Glow & Flow Retrofit Eyeball light has evolved from four LEDs (the E1) to 12 Superbright LEDs (the E1/12), now five times brighter than the original. This light's power use has only increased from 0.3W to around 1W, and when compared to a 100W halogen globe the power usage of the E1/12 is only about 3 per cent of that of a 100W globe. Using only two E1/12s in a standard pool, the light output is very close to that of one standard wall light. These lights are suitable for when the pool builder has forgotten to put in a provision for lights.

The new Flow Through Light (FT33) is a retrofit light that is installed in exactly the same way as the E1 series, and can light up an 11m pool on its own.

For something even simpler, to install the Glow & Flow Slimline36 Wall Mount just place a piece of pipe or conduit through the wall as normal, finish the pool interior and then screw the light horizontally or vertically onto the wall. Niches are available for that flush look.

Thirty-six superbright LEDs comprise a slimline configuration that only protrudes into the pool some 12mm, and one unit will light up a standard 10m x 5m pool (and still draw 3W.) This light requires no wall bracket and is in itself waterproof.

The flush-mount In Pipe Light (IPL) is suitable for small pools, ponds and steps. There is no protrusion into the pool, and it also has 12 superbright LEDs.

According to Glow & Flow Lights, the trend today is for fun lights. The company has developed radio remote-controlled colour-changing models. The Sound Dancer can even be plugged into a stereo, and the light in the pool will dance to the beat of the music.

I am interested in Glow & Flow Echidna LED replacement globe . 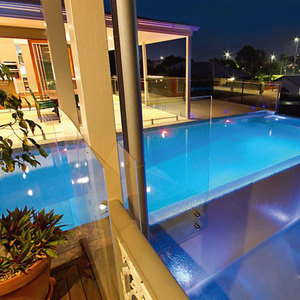