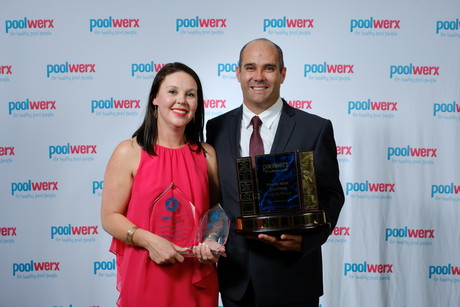 Poolwerx has named its best and brightest franchise partners at a gala evening following its three-day convention at the InterContinental Fiji Golf Resort and Spa.

Shann and Ged O’Sullivan of Coffs Harbour took out the national Franchise Partner of the Year award, as well as the Top National Mobile Sales Award. The win comes after the duo won the top franchise award in NSW for three years in a row.

The O’Sullivans started the business as a small three-person operation 11 years ago. The team now comprises 14 people across two retail stores and seven mobile service vehicles.

“For us, the award represents what you can get out of franchising if you put in the hard work and follow the systems,” Ged O’Sullivan said. The O’Sullivans won a $10,000 overseas trip as part of the award.

Less than a year after joining the industry, Mitchell Thornbury was named the New Pool & Spa Technician of the Year. Thornberry’s parents own the Poolwerx Bathurst franchise. He said he had seen first-hand the potential for a career and business in the pool industry while he was growing up.

“My parents started their mobile pool servicing franchise in 2012 and have achieved around 18–20% annual turnover growth each year since then. I wanted to be a part of that and I saw that pool servicing was a specialised trade that offered a career pathway and the opportunity to work on a variety of jobs,” Thornberry said.

Poolwerx CEO and founder John O’Brien said the awards recognised the effort and success of franchise partners and their teams across a range of categories, including technical, brand, retail, B2B and innovation excellence, as well as retail, mobile and B2B sales.

“All of our winning franchise partners and team members are prime examples of what can be achieved when your vision is strong and you focus on providing a top customer experience,” O’Brien said.