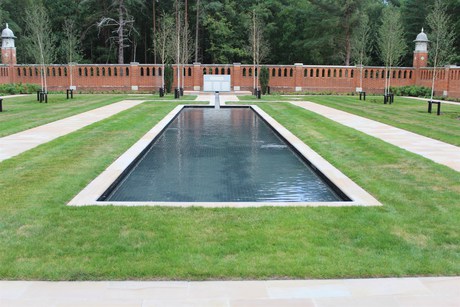 A brand new architectural water feature installed in the acclaimed Muslim Burial Ground in Woking, UK, is bringing together functionality, ease of maintenance and soothing aesthetics.

Installed by Fountains Direct, a leading UK-based company specialising in the design, installation and maintenance of both commercial and domestic fountains and water features, this sizeable project uses the newest alternative to chlorine with superb results.

Nick Roberts, managing director of Fountains Direct, was responsible for the design and Paul Everdell, sales and design engineer, for the overview of the installation. Everdell says Waterco's chlorine-free Hydroxypure system was the obvious choice for the Muslim Burial Ground project.

“We are always looking for an alternative to chlorine, and Hydroxypure presents many benefits," he explains. “No chlorine smell or corrosion, and it produces perfect crystal-clear water. It is also easy to install, fully automated and makes maintenance simple.

“We are now specifying Hydoxypure on all of our new and some existing installations."

Completed in June 2015, the concrete water feature at the Muslim Burial Ground holds approximately 8000 L of water, is fully tiled and incorporates a small waterfall at one end.

Installing the water feature at this site was not without its challenges.

“There were no foul drains in the filter chamber area, so to bring one to it would cost a large sum of money," says Everdell. “This made Hydroxypure the best choice, as the water can be backwashed to the surface wastewater system (in this case, a soakaway) as there are no harsh chemicals in the water to damage the environment.

“Because the ground water was high in the filter area, the filter chamber floor had to be built higher than was originally designed. It took a while to gain approval from all interested parties for this."

Also installed at the site is a Waterco Micron 30″ side-mount sand filter, which incorporates the unique fishtail lateral underdrain arrangement. This works to increase filtration quality and reduces water loss through backwashing, which were two important features on this installation.

These two products have been successfully keeping this famous architectural feature looking its best since it was first installed.

“The architect wanted a shallow reflective surface with little water movement, so the feature had a calming effect," explains Everdell.

“The pool is very shallow, black tiled and open to full sun, so it is even more impressive that the Hydroxpure is working so well. The water is soft and does not leave limescale marks, which is so often the case with other features that use a different sanitation system."