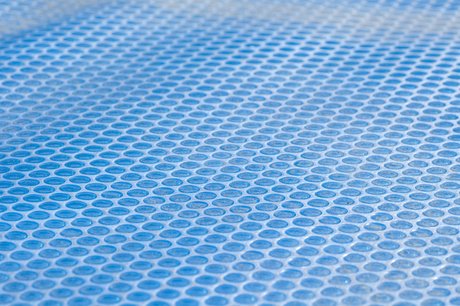 Daisy Pool Covers received this glowing endorsement from customer Gordon Halnan about the Daisy cover he’s had for more than 12 years.

I could easily talk the leg off an iron pot raving about the best pool decision I ever made: getting a Daisy pool cover!

For at least 10 years now I have been telling pretty much anyone to put a Daisy pool cover on their pool. Friends and family, of course, but even when I meet people at a BBQ or party, once I find out they have a pool, I tell them they MUST get a Daisy pool cover.

I got my Daisy pool cover in November 2004. I really wasn’t sure about spending $1200 ($600 for the blanket, $450 for the roller, $150 for the pool shop install), but having lived in my home for two summers (I moved in 2002), I decided to bite the bullet because the evaporation was just ridiculous. I remember I used to put the hose in the pool every fortnight over summer.

Since November 2004, I have only put the hose into the pool once to top up the water level. Yes — once in 12 years, including the Sydney drought which was particularly bad from late 2006 to early 2008 (three summers).

I don’t consider myself a particularly good environmentalist but I do try to reduce the negative impact my household has on the environment, so my decision really was driven by the evaporation issue — and you don’t have to be Einstein to see that my Daisy pool cover has made a huge difference.

My pool used to have the old solar heating system, which was basically a heap of black rubber tubes on my roof. It had a separate motor to pump the water up to the roof and parts always needed replacing. I recall doing a few tests over the summer of 2003–04 (the summer before I got the Daisy) to see just how warm I could make the pool water. The highest temperature I managed was 32°C — after running the ‘heater’ during 100% of sunlight hours (costing who knows how much in electricity).

Not that anyone needs a pool warmer than 32°C, but the Daisy will get the temperature to 34°C in January, so I can actually keep the pool around 30°C from Christmas until mid-February with no electricity expense. I threw out the rooftop solar heating in 2006 — my gutters thank me for no more leaking salt water.

Another one of the benefits the pool guys told me about back in 2004 was the reduction in leaves and other debris making its way into the pool. I wasn’t too worried because I don’t have any trees overhanging the pool area.

However, I’m not sure too many people can make this boast: my pool cleaner died last summer, so my pool hadn’t seen a vacuum of any sort since before Easter. There were about two baskets of debris at the bottom of the pool — after six months! The pool cover did have a fair bit of rubbish on top — but that was no trouble to sweep off (and then scoop up) as I rolled up the blanket three weeks ago to get ready for summer.

I’m pretty sure I use fewer pool chemicals. The sun kills chlorine and the need for pool stabiliser is also reduced because the blanket solves that problem. I have no idea of the value of any of those savings — but it has got to be worth the cost of the pool cover several times over since 2004.

The last thing I will say is that I was very worried about spending money in 2004 and having to replace the blanket at some unknown point in the future. Given that my Daisy pool cover is 12 years old, I will happily tell anyone that Daisy’s guarantee is solid.

I’m looking forward to another great summer of backyard swimming — brought to me by Daisy!