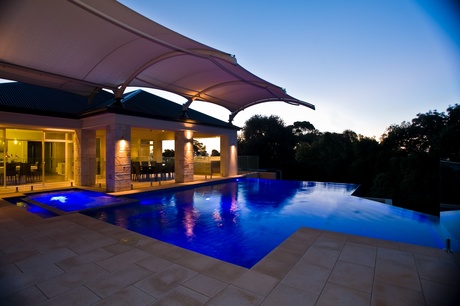 Where was this pool built?

What brief were you given by the client?

The client had a good idea of what he was looking for. He came to us with a rough drawing and said he was after an “award winning pool”. After a few meetings we defined the drawings, gave him some new ideas and inspiration and then we were ready to commence with a design we were all happy with.

The final design featured the pool set right up against the house. The idea was that you walked out the back door of the house, into the entertainment area, then straight into the pool. This was the main principle to the design.

What was your biggest challenge in constructing this pool?

The main challenge when constructing this pool was relocating around 3,000 ton of earth. By cutting out the block to fit the pool in, we then relocated the dirt around the property.

What makes this pool stand out from the rest?

This pool stands out for two reasons, one is the back drop. When you look out from the back of the house you see the water flowing over the vanishing edge and then disappears into the Adelaide Hills. Second is how the pool and spa wraps around the entertainment area of the house, it really looks amazing.

What awards has this pool won?

This pool has won two Awards:

This pool has now been entered in the National Awards

Can you tell us some of the technical specifications of this pool?

The pool has two beach areas for the kids and a moat around the spa pool.

About Daydream Pool and Spas

With over 25 years experience in building concrete pools, in 2006, Danny Parks and David Malone decided to create Daydream Pools.

“When building with us you deal directly with the owners, from the initial phone consultation to the handover of the pool,” said Mr Malone.

Since conception, Daydream Pools has been South Australia’s most awarded pool company. Their specialty is the negative edge/vanishing edge pools, indoor pools and lap pools.