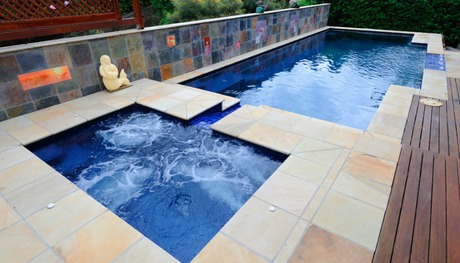 The team from Compass Pools Centre, Northside QLD, received a call from a family wanting a ten-metre pool and spa combination that was as automated as possible with a simple, sleek look. After a lengthy construction the resulting pool has delivered all it promised and won several awards along the way.

The pool was built in Paddington, Brisbane. Due to bad weather and building of extensive retaining walls, the project took about two months from start to finish.

The pool/spa interacts closely with the house yet does not impede access to the backyard. After leveling the considerable slope, the pool, yard and entertaining area sit on the same level creating a sense of "ease of use". The clients added their own personal touch with the water feature wall, which runs the length of pool and by adding a ceramic dolphin design.

Access to the site was extremely limited so a complete road closure was required while the 100-tonne crane lifted the pool, spa and the client's new subterranean water tank into place. During excavation the team came across a skull, so the whole site was closed down and became a police investigation area until it became clear it was a sheep's skull (and not an aboriginal burial ground!).

To create the pool a ceramic composite construction was used, which improves thermal qualities of pool and eradicates any chance of osmosis. A biluminite surface was also used, which creates a luxurious looking surface to the pool. The mechanics of the pool included a CL600 filter (once per year clean), Astral Viron p300 pump, Vantage self cleaning system with debris containment system upgrade, ozone sanitization combined with residual Aqua Therepe minerals, plus a separate filtration and self cleaning system for the spa (zx150 filter). Also installed in the spa was an automatic water leveler and blower activated by air switch on the deck. All filtration is completely out of sight, situated beneath the deck.

Les Robinson from Compass Pools said, "Many clients would have assumed this would be a concrete pool due to the complexity of job and inner-city location, but it's a great example of how composite technology has developed in recent years. It's as fully automated as a pool is able to be, with a beautiful looking, deep blue, smooth biluminite surface that is comfortable for adults and children alike."

"Other outstanding features of the project include the automated touch pad to operate the vantage self cleaning system, spa temperature, filtration of pool and multi-coloured LED lights. The automated touch pad also displays the temperature of the pool and spa and has an actuator inside which can control the sunpod (horizontal bubbler water feature) and shut off water flow to the spa when it is being heated."

This pool has won the gold in the SPASA QLD Awards for the category 'Domestic Composite Fibreglass Pool, Traditional or Geometric, Over $40,000.'

The Compass Pools Centre factory was opened in 1980 by Ian and Kerri Mewitt. Previously, Ian had been in the navy and when he left he decided to build fiberglass boats. Before long he began making fiberglass pools. Ian and Kerri still run the business today. The local dealership has been operating for approximately 15 years and is owned by Warren Druhan. Their specialty is self-cleaning pools made with a ceramic core and biluminite surface.