In the name of art - pool builder creates lake 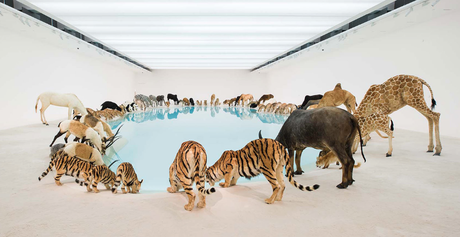 Tom Stanley from Redlands Pool Service had completed several successful displays with the Queensland Gallery of Modern Art (GOMA), when in 2013 they asked him to tender for the ‘Cai Guo-Qiang: Falling Back to Earth’ exhibition.

Cai Guo-Qiang is an international artist, whose large-scale installations and explosion events have made him one of the most innovative figures in contemporary art. Over the past 25 years, Cai Guo-Qiang has held solo exhibitions at some of the world’s most prestigious art institutions.

The ‘Falling Back to Earth’ exhibition features four installations. The centrepiece of the exhibition, ‘Heritage 2013’, features 99 replicas of animals from around the world, gathered together to drink from a blue lake, surrounded by pristine white sand, reminiscent of the lakes of Moreton Bay’s islands in Queensland.

It was this blue lake that Stanley built and maintained for the duration of the exhibit, which closed on 11 May 2014.

“There were a few unknowns relating to this project, including the weight of the display on the gallery floor, sustainability of the liner and concrete rendering around the lagoon, the correct sanitiser to use in the recycled air-conditioning system and after all that, what unknown factors would arise in this unique environment?”

Following 18 months in planning and approvals, it took approximately 3 months to construct and 250 metres of pipe to plumb the 170,000-litre lake.

“The engineering approvals and the logistic nature of the complex made the job challenging. Most of the materials had to be brought up to the gallery level in the lift, a very slow process when there were up to 30 or more people working on the display, including carpenters, painters, lighting technicians, artists and electricians,” added Stanley.

Graeme Ellis and Michael Connors from Complete Pool Liners installed the pool’s vinyl liner. This involved installing two Abgal fabricated pool liners from Computer Aided Design, supplied by the gallery. The first liner was built within a timber frame acting as a fail-safe. The second liner was installed on top of this, and it was within this second liner that the display was built. Ongoing meetings with the project team meant that a crease-free, perfect and sustainable finish had to be guaranteed for the finished product.

“The opportunity to work on such a large-scale project at GOMA was certainly an experience for Graeme and me, and we are extremely happy with the finished product,” said Connors.

The blue lake was operated like a normal backyard pool, with twin cartridge filters, a Viron energy-efficient pump and a chlorine dosing machine, which were all supplied by Astral.

Cleaning of the pond was always going to be a challenge, because, at the artist’s request, there could not be any fittings, skimmer boxes or pipes visible to the general public.

“The battery-powered, cordless M5 Liberty robot was chosen as the most suitable cleaner for the display. The uniqueness of this exhibit meant that the device would need to create minimal disruption; I would walk through the lake controlling the robot with the remote,” said Stanley from Redlands Pool Service.

Daily maintenance was carried out by GOMA staff and weekly by Stanley for the duration of the display. Vacuuming with the M5, brushing and scooping were daily duties.

“The project was very exciting for me. All of the GOMA staff were very professional to work with. The display worked out almost how I thought it would, except for few little things. Those things would be expected in a job of this nature.

“The biggest hurdle of this job was just to be able to guarantee to the GOMA staff that it was going to work; I just had to visualise and use my 16 years’ experience in servicing and building in the pool industry to ensure it did.

“Once the project was up and running, I felt a large sense of satisfaction that all of the hard work I had put in had paid off,” said Stanley.