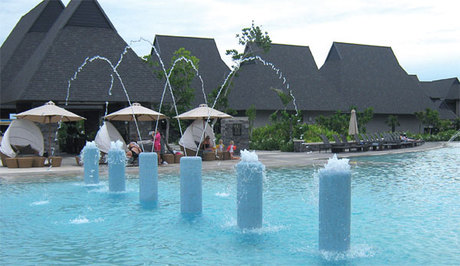 The Intercontinental Fiji Golf Resort and Spa is located on the beautiful and picturesque Natadola Beach on Fiji's main island of Viti Levu, approximately 45km from Nadi International Airport. Being several kilometres off the main Queens Road it is quiet and secluded, with no traffic to contend with.

Apart from the beach where 20 cabanas are available, the many swimming pools include one "infinity" type for adults only and a family-friendly pool offering 1050sq.m (105m x 10m) of activity space exclusively for various children's water activities (pictured).

These pools, and others in the complex, were designed by the late Victor de Fontenay, and the lighting was designed by Glow & Flow Lights Pty Ltd. Vic designed most of the pools, equipment and lighting in Fiji over many years and will be sadly missed in the island community.

Glow & Flow lights were used to visually 'divide' the pool by lighting a line of "poles" across the middle of the pool. One shallow end, with bubblers and sprays, was designed for the smaller children and the other deeper end for older children who mainly wanted to swim and play older games.

The lights are installed in the top of six columns, to light bubblers in the outside four and sprays in the centre two. The floor around the columns has fifteen lights illuminating the surrounding water.

The lighting system is capable of being plugged into a sound system and will 'dance' with the beat of the music to entertain the children. According to Mr Natwar Patal, the Chief Engineer, the lights have been most successful and quite an attraction for the resort.

The main adult pool overlooks one of the most picturesque beaches in Fiji. It has 20 permanent lounges moulded into the floor of the pool facing the water. A guest can lounge in one with the water coming just under their chin. A Glow & Flow eyeball light connected to water and air is injected between each lounge at shoulder level for night time use. The effect of the air and water, lit by the warm white LEDs, is quite spectacular.

It offers 216 tropically, yet comfortably furnished, guest rooms and suites at sea level, positioned in clusters like traditional Fijian villages around the 14.2-hectare site landscaped with lush tropical plants.

As well, there's a gymnasium, yoga deck and an "I-Spa" with nine rooms for massage and other treatments; sauna, hydrotherapy, steam and ice rooms and a "meke" (traditional dancing) lawn for cultural and indigenous shows.

Diners have a choice of five restaurants, including outdoor tables for theme nights, whilst among the great conference facilities, there is a pillarless ballroom accommodating up to 500 delegates, as well as three other separate meeting rooms which seat up to 80.

One unique feature of the resort is a sugar train railway line that passes through the property and under one building. (Not operational as of time of writing - negotiations with the local chiefs are still underway).

For keen golfers the Resort has a magnificent Vijay Singh designed championship 18-hole golf course. One of only two in Fiji, the other is a public course in Nadi.