Designing pools? Go back to school 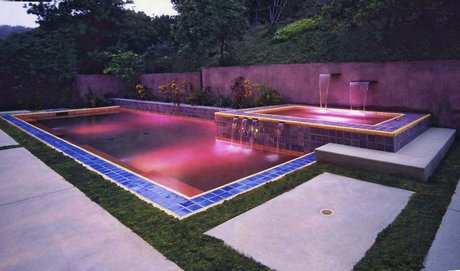 Listen up, pool builders: David Tisherman thinks you’re not qualified to design pools. Read on to find out why the man who’s known as the Frank Lloyd Wright of the pool industry believes pool builders need to go back to school. In an exclusive interview, Tisherman shared his thoughts on education, design and credibility with Pool+Spa. As told to Alice Richard.

From my standpoint, and I hope you quote me on this, in most cases, most pool people are uneducated and definitely unqualified to do anything.

I’ve had clients come to me and say, “Could you tell me what your background is?” And my background is, I’m an industrial designer, I taught architecture and design at UCLA, I teach in the landscape and architecture departments specifically on building pools and spas and water effects. My background is very heavily oriented towards the arts, and I have degrees in two or three other fields.

When you talk to a pool person - a ‘pool guy’, so to speak - why don’t you ask him where he learnt about design? Better yet, ask him who is Hundertwasser? Or what is the Archigram? Or if I talk about neoclassicism - what does that really mean? And when I talk about a Roman-type pool, does that really mean it’s rounded at both ends? Better yet, where did the first spa originate - the very first spa known to man? Where was it done, how was it made and what was it used for?

And the chances are, anybody who’s reading this article, anybody in the pool industry, they’re going to look at you and go, “Huh?” Because they don’t have that kind of background. So what gives them the qualifications to design anything? The biggest problem is that most people in the pool industry are not qualified to design.

Designing for the site

So now we’re past that, the fact is that what dictates design has nothing to do with the pool guy. The very first thing is the architecture and style of the house. The idea is to walk into a backyard and go, “Oh my god, this is beautiful,” not, “Gee, look at the pool”.

You’re designing for the site, for the entire project - you’re not designing for one specific area. That’s why 99.999% of the pool industry’s photographs are taken from the house looking towards the pool. You rarely see pools photographed looking back with the house included, because most people in the pool industry - and that’s excluding landscapers and landscape designers and architects - don’t understand that it’s all about the site, the environment. It’s the entire scope.

So, if you’re photographing a pool and you can shoot it behind the pool back towards the house or looking at the architecture, then you get a true sense of: Is this beautiful? Does it work? Are the materials proper? What about the scale of the pool? Are the water effects in keeping with the feel of the house?

This isn’t just about a pool. This is about colour, proportion, design, architecture, understanding materials. There are definite reasons that certain pools look the way they do and other pools don’t, especially when you look at the detailing.

I had a client who had a landscape architect who really wasn’t - but he said he was. We found out that he’d just gone through school and taken a couple of classes. He told the clients that they should have a little mountain lake tucked up into the hill with a waterfall. Except the house was built around the design principles of a fellow by the name of Ricardo Legorreta - he’s a Mexican architect. Think massive walls of strong colours - reds and purples and yellows.

And I looked at the site and I started to laugh. I said, “You don’t want that.” And Michael, the client, said, “What do you mean?”

I said, “I understand what your style is. What you need to do is go to a book store and get a book on Legorreta. Go home, and then think about a little mountain lake with a waterfall, or think about something interesting. Look at Legorreta.”

I got a call two weeks later from Michael. He said, “I want to apologise. I’m wrong, you’re right. When do you want to meet?” I said, “There’s no such thing as wrong or right - it’s about what you want.” He said, “Well, I want you to do this.”

So now we’re talking about education, but we’re also talking about telling the client “no”. But if you personally don’t understand the design process, meaning you haven’t studied enough about what design actually is, then how can you impart this knowledge to the client to get them over a pool with rounded ends and a couple of steps?

When I get a call from a client, most of my calls - actually 95% of them - are by referral or because they’ve seen my work. It’s pretty straightforward: I’m not putting in a pool for $25,000. So, I get a call. Most pool companies would say, “Okay, I need a name and an address. I’ll have somebody come out and talk with you and we’ll start from there.” Does that sound about right?

I spend almost two hours with my client. I want to know if we have any synergy. I want to know how they’re going to use the pool. If they tell me that they have incredibly beautiful floors in their house, well, to use Frank Lloyd Wright’s whole theory of taking the outside and bringing it inside, then I may want to find a wonderful stone, or something to pick up the same colour as the flooring in the house to extend the eye visually.

It’s a question of “do you want gorgeous?” Everybody wants it, but the problem is that if you don’t know what to ask for, then you’re not going to get it, are you? It’s like buying a set of tyres. If you don’t know anything about tyres, you’re going to get exactly what the salesman sells you. You don’t know if that salesman has been around for three weeks or 35 years.

Why can’t he go to school and take one or two classes every quarter? You can go to all the shows in the world, forever and ever and ever. But if the education isn’t good, then what good does it do you? You come away with a false sense of credibility.

That doesn’t work. Because the client who wants to spend four, five, six hundred thousand dollars, they’re not looking for a pool guy. They’re looking for a person who is knowledgeable about design. And colour. And proportion. And scale. And they want them to understand architectural details. They’ve spent a lot of money on their house.

So everybody - I don’t care where they are - has the option of going to school, which I think is really cool.

Draw me a picture

There was a fellow when I was teaching my first year at UCLA - his name was John Demery. And John said to me one day, “The only difference between good design and bad design is visualising it. And the only way to visualise it is to draw it.” I never forgot that.

Right now, if I walked into a room with 100 people in the pool industry and asked them to draw a detail from a set of plans without a computer, I would say 99% of them would fall flat on their butt.

Now, the computer can do lots of things. But it can’t draw in front of the client with you talking and designing, because it’s too slow. It can make changes; it can print things for you; but it can’t sit with the client and draw. If you can’t do that, you’ve already lost.

Confucius said, “A picture is worth a thousand words.” It’s probably more like 10,000 words, but it’s absolutely true. I could talk to you until I’m blue in the face, but if I drew a picture for you, in about a minute you’d understand it. Make sense?

So none of the things I’m saying are mind-boggling. They’re very straightforward. It’s just that this industry doesn’t get it. And it’s sad. Now I’ll bet you if you called 20 builders right now and asked them what their background is, can they draw beautiful perspective drawings, even details, I’d be amazed if you had more than 10% say yes.

When you look at something, you’ll say, “Oh, I really like that,” or, “That is the ugliest thing I have ever seen!” Okay, so what makes it beautiful? Is it the colour? Is it the line? And that’s why you have to have this education where you can look at things and understand that. And our industry, sadly, doesn’t have that.

How to build rapport in the first 90 seconds

Making a good impression during your first face-to-face encounter is more likely to win you the...

Letter to the Editor RE: 'Multiple pools on one set of equipment'

While in most cases to connect three pools to one pump and filter may not be the best thing to...