The Queensland Building and Construction Commission (QBCC) has responded to a question raised at a SPASA Queensland PSI (Pool Safety Inspector) Sector Group meeting. The group queried whether a fence needs to be able to be measured at 1200 mm in a full arc from the top right-hand corner of the step in figure 2.2(b) of the Standard. (See image below.) 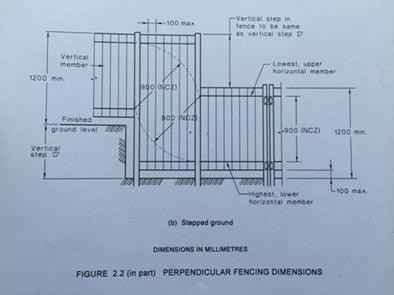 The QBCC responded as follows:

We have reviewed the standard and concluded that it is silent on this point.

Therefore it appears that provided the 900 mm NCZ (non-climbable zone) is provided for according to the diagram, it is not necessary for there to be a minimum 1200 mm distance between the top RH corner of the step and the intersection where the two fence panels meet.

We took the following approach:

Put another way, it isn’t necessary to insist that the panel extend so far that its edge is at least 1200 mm measured in an arc from the step; rather only far enough to allow for the 900 mm to be measured as per figure (b).