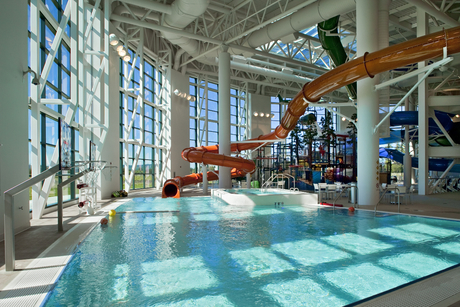 Delford Smith returned from a business trip one day with an idea. He wanted to build a water park in his home town of McMinnville, Oregon — a historic city located in the heart of Willamette Valley’s wine country, and strategically nestled between the Pacific Coast and Portland.

Smith wasn’t talking about just any water park. After all, this is the entrepreneur who had purchased Howard Hughes’ famed Spruce Goose so that he could add it to his Evergreen Aviation & Space Museum, which features more than 200 exhibits including military aircraft, helicopters, and commercial and private aircrafts. The museum was built in honour of his son, the late Captain Michael King Smith.

Smith thrives on being unique. So he called a meeting with some local project managers to bounce around the idea. He told them he wanted something to complement his aviation collection.

Smith sought a structure that would not only get people talking, but that they would have to see and experience for themselves.

When one of the project managers mentioned putting an aeroplane on the roof, Smith loved the idea. However, his vision went further: he wanted a 747. The entire room was sceptical, but Smith was convinced that it could be done.

Sure, a German aviation museum outside of Berlin could put a 747 on stilts outside its building, but could an aeroplane be placed on top of what would be an 18 m building — and with a series of water slides running in and around it, too?

They called it ‘the pick’. After nine months of engineering and design work, construction crews secured two massive cranes on a near-windless morning in May 2010. Employing one of only seven Boeing recovery slings in the world, they began hoisting the Evergreen International Aviation B747-100. One hour and eight minutes later, the 149,000 kg plane — which had logged more than 40 million km during its aviation lifetime — was bolted cleanly into place.

Smith’s entrepreneurial vision struck again. The massive plane became the anchor for the Evergreen Wings & Waves water park, located about 400 m west of the Spruce Goose. It is billed as ‘the only water park that comes with an aviation and space museum’ — the first in the country to combine waterborne fun with educational themes that help visitors learn about the power of water and its effects on the world.

The 21,750 m2 park features 10 water slides — four of them exiting directly out of the fuselage of the Boeing 747 sitting atop the roof — a wave pool and the children’s museum. The fastest of the slides is the Nose Dive, a two-person inner tube ride that combines a fast initial drop into a high-rate banked turn. It leads the riders into a dark oscillation section before ‘breaking out of the clouds’ through a hologram image and into the circular bowl below. Other slides include the Tail Spin, the Sonic Boom and the Mach 1. Today, the water park and museum has become one of the most popular tourism attractions in the state.

“Helping turn this vision into a reality was one of the coolest things we’ve ever done,” says Dave Garske, operations manager for Hoffman Construction of Portland.

Reflecting on the project, Garske says one of the more interesting challenges was how to figure out a way to protect the building from all the water.

“Tile was a major part of this project. Basically, the entire inside of the building is a big swimming pool. There is water and tile everywhere — in the pool, in the bathroom, along the walls. Chlorine can be very corrosive. So we had to figure out a way to keep the building from rusting from the inside out. We had to manage the chlorinated water. We spent a lot of time working on keeping the water safe for the visitors and the employees.”

Hoffman worked closely with Paragon Tile of Tigard, Oregon, which had successfully bid on the project. As Paragon began to map out the project, the company knew what was needed. That’s when Paul Luttrell, VP of sales for Paragon Tile, called LATICRETE sales representative Mike Werner.

“In particular, we used LATICRETE Latasil because we needed something that would not crack or deteriorate in the wet coved areas and corners for the life of the installation,” Luttrell says. And with the amount of tiling prevalent throughout the facility, Luttrell used LATICRETE SpectraLOCK PRO Grout, a product designed to be used for swimming pools, fountains and other wet area applications.

Paragon used the products in the entryway, in each of the restrooms, in the water lines in the pool, in the mezzanine and on a lot of the wainscoting throughout the building.

“Everything needed to be waterproofed or have crack isolation. So we chose LATICRETE Hydro Ban to use behind all our tile.”

LATICRETE Hydro Ban is a thin, load-bearing, waterproofing/crack isolation membrane that does not require the use of fabric in the field, coves or corners.

“In the pools,” continued Luttrell, “we used LATICRETE 4-XLT; on the water lines we used LATICRETE 254 Platinum; and for the floors, etc, we used the LATICRETE 255 MultiMax. Everything was grouted with LATICRETE SpectraLOCK PRO Grout. It’s such a strong, high-performance product; we couldn’t use anything else."

Working in and around the other contractor schedules, the job took Paragon nearly five months to complete. “It was a pretty unique job in the fact that there is nothing else like it,” Luttrell says.

“The pools and the shapes were pretty unique. At some of the counters you have half of an aeroplane sticking out of the wall, so that’s unique right there. It’s an eye-catcher. As far as the installation of the tile, it was a pretty standard install, except for some of the custom mud floating work we had to do. We were confident to use LATICRETE products for the water park as we know they perform at high levels, and the company stands behind its products as well. This was a project we clearly won’t forget.”