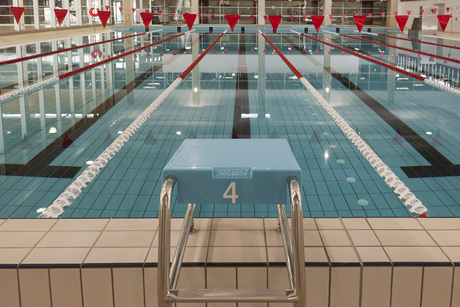 Prince Alfred College in Kent Town, South Australia, is an all-boys school with over 100 years of tradition. The school had an ageing outdoor 25 m pool surrounded by other sporting facilities, such as basketball courts, which were all in need of repair and upgrade. The school decided that rather than demolishing the existing pool, the pool would be renovated and an auditorium constructed around it to create an indoor, health and sports centre that could be used by the school students and wider community all year round and in any weather. Containing a renovated 25 m pool, a new learn-to-swim pool and plant room, two basketball courts, change rooms, a health and fitness studio and a number of other multipurpose areas, it is now the largest facility of its kind in Australia.

The pool design was completed and overseen by FMG Engineers from Norwood, SA, who have an outstanding reputation Australia-wide for their works on commercial swimming pools, new and refurbished.

The lead contractor for the entire centre was Tagara Building Group, who subcontracted Quantum Pools to undertake the pool works required.

The project was started in December 2011 and was complete in April 2013. The pool had to be completed on time and on budget to tie in with school terms and swimming lessons that had been booked for the new ‘Kent Town Swim’ swimming centre that is operated by the school from the facility.

Anthony Polkinghorne, general manager from Quantum Pools, believes that a good design starts with using the right people. “The team at FMG Engineers together with Quantum Pools ensured the job was completed at the highest level with the most up-to-date technology available.

“The pool is the centre point for the whole facility and it needed to stand out in quality. Looking at the pool now you would never believe that it wasn’t a new build. Weekly site meetings with the architect, engineer, head contractor and other contractors were held to ensure quality and timelines were met,” he added.

The main pool, which measured 20 x 25 m, was renovated and converted to a wet deck pool. A Spectrum Glacier disabled lift external to the pool shape was installed to ensure disabled members of the school and wider community could easily access the pool.

The central section of the pool, which was originally built for diving, was decreased from 2 m to 1.3 m to make it more suitable for the schools’ needs and cut down considerably on heating costs.

All construction joints in the pool were renovated using the ‘Parchem’ Emerband and Hydrotite systems. The central return culvert was replaced with a 200 mm central return.

New 150 m returns were run down either side of the pool to aid better circulation and eliminate dead spots along the side walls.

The pool was fully tiled using a Metz commercial tiling system and new competition equipment - such as starting blocks - from Pierce Pool Supplies, Astral Pools and Pooldeck was installed.

The size of the balance tank was also increased to accommodate for the increased water flow.

The site for the learner’s pool was situated over an area that was previously a building and there was a substantial amount of unstable soil. The pool was founded on 12, 6 m deep piers. The learner’s pool side wall also incorporated the pillars that support the roof for the structure over the pool.

The pool has been awarded with a Gold Award in the category of Commercial Pool over $250,000 in the 2013 SPASA South Australia Awards of Excellence. It was then also awarded with the Judges Choice Award for Gold as Pool of the Year.