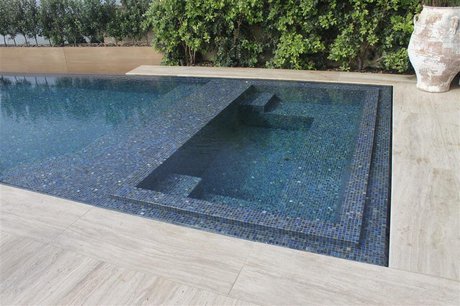 Sought after since ancient times, the semiprecious stone lapis lazuli was used to tile a thoroughly modern pool in a luxe private residence overlooking the Pacific Ocean in California. Originally called ultramarine, which denotes ‘from the sea’, lapis lazuli was the perfect choice for this pool: its deep blue tones with golden shimmer (thanks to its pyrites inclusions) beautifully reflect the pool’s position between sea and sky.

Rock Solid Tile of Los Angeles, California, is an elite tile contractor that has taken the process of installing tile for swimming pools to the ultimate level. With a résumé including some of the most unique and immediately recognisable water feature projects worldwide, owner and president Jimmy Reed approaches every job in a unique way.

“Step one is to connect with the owner or the designer; the person who leads the team,” he said. “Step two is to make sure we can provide above and beyond what is the client’s expectation.

“Most people are not familiar with [what’s involved in] a high-end swimming pool. Their image is just to ‘tile the pool’ and after that, the job is done. From our standpoint, that really isn’t the case, as a high-end swimming pool is a completely different animal; it’s much more than just adhering a tile to a water feature surface.

“Rather, it’s actually a very structured, complex process which consists of very detailed steps that result in building a stunning piece of art for the environment.” 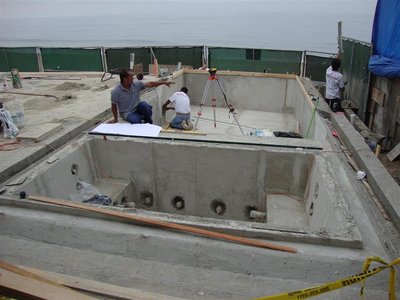 When working on a pool project, Reed says his job doesn’t begin or end with the visuals.

“As far as we’re concerned, it has to be a bulletproof installation which lasts a lifetime. Any failures occurring after the tile installation are not an option.”

Designed for an ultraprivate seaside California home, the pool was built for owners who spend only a few weeks each year at the residence.

“We used the LATICRETE System for the entire project,” said Reed. “This included LATICRETE 254 Platinum (grey) for the initial bond coat, followed by LATICRETE 3701 Fortified Mortar Bed for all of the levelling that was required. For the waterproofing aspect, there is no substitute for LATICRETE Hydro Ban. 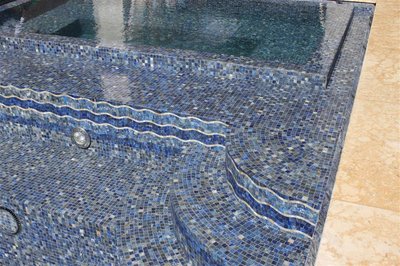 LATICRETE 254 Platinum was the logical thin-set for the project - in particular because it works at optimum levels for underwater applications. LATICRETE 3701 Fortified Mortar Bed was selected for its superior working and physical properties compared to site-mixed levelling mortars.

“The Lapis Azul [lazuli] was stone material, not a translucent glass tile. As a result, there was not the need to illuminate the glass by using white thin-set beneath it. That’s why we opted for LATICRETE 254 Platinum in grey rather than white,” Reed said. 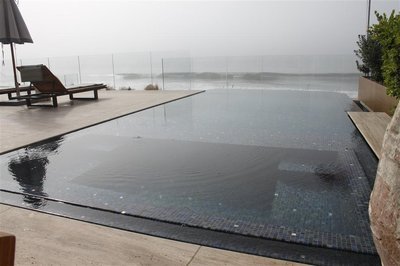 The surrounding deck area was clad with natural travertine tile. Solid quarter-inch plates of stainless steel were mounted around the deck’s periphery to support the coping detail for the Lautner Edge. From there, 2.5″ thick travertine coping was adhered to these plates using LATAPOXY 300 Adhesive, which not only offers a strong bond but also prevents curling on moisture-sensitive stone material. Additionally, it doesn’t stain lighter-coloured stones such as travertine.

For all projects, Reed and his team are in contact with LATICRETE’s technical department whenever necessary. The department is guided by Arthur Mintie, LATICRETE director of technical services.

“LATICRETE supports us at all times. It’s good to know we always have direct access to top professionals such as Art and his staff,” said Reed. 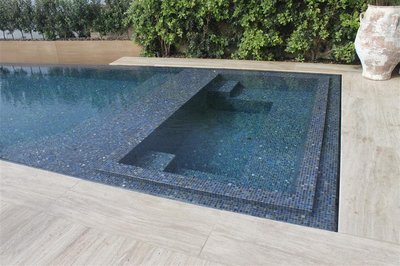 “We specialise in luxury tile installations for swimming pools, spas and other water features. Working with designers, architects and owners who appreciate and focus on quality and detail, our goal is always to satisfy our clients and walk away from each and every project knowing that we were an integral part of creating a thing of beauty that will last a lifetime.

“To accomplish this, we depend on LATICRETE products. We know they are easy to install, we know they are long lasting and we know that whatever support we need will always be immediately available.”