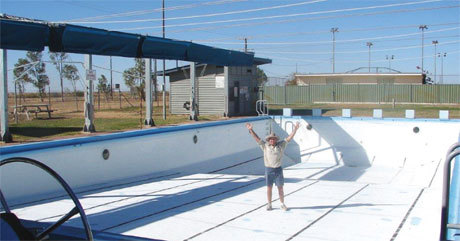 The steady decline in the number of new pool sales during the past 3 years is causing many builders to concentrate more of their efforts to the renovation and updating of older pools.

No doubt adding to this has also been the slump in the general building industry and sliding property valuations, causing greater numbers of homeowners opting to keep their existing home, update the dwelling and the pool.

Proof of this upsurge, was evident at the recent Perth & Sydney Pool & Spa Expos, where many builders reported taking more enquiries for renovations than new pool installations. In fact, some builders admit declining to quote on projects which are outside their normal local area of operations. The staff at the S.P.A.S.A (N.S.W) office are also reporting that people who left their names with builders at the Sydney show for pool renovations a month ago are asking when they can expect to be contacted.

This feeling was also reflected by some suppliers exhibiting there. Expressing their surprise at the number of visitors showing interest in new products and innovations for existing pools. One major Sydney builder told pool and Spa Review that during this current financial year, 60% of the company's turnover will be for the refurbishing of older pools.

The million or so privately owned pools in Australia, half of which are over 20 years old, will provide a steady market for renovations.

Last year's move by the Federal Government to provide funding to local councils for community projects is also proving to be a shot in the arm for the industry. Many of the 600 local government bodies in Australia have chosen to spend this allowance on the installation of a new commercial pool project or the renovation of an old one. Typical of this was the 50 year old pool in the far North Western Queensland town of Julia Creek. The pool is in an area 850 kms west of Townsville.

The successful tenderer for this project was veteran Sydney builder Al Hooper, who is well known in the industry as the original founder of Mutual Constructions in Adelaide back in 1963. Since that time his companies built well over 10,000 domestic concrete pools and Olympic pools for Sydney's Waverly College and Santa Sabina Girls' School.

On completion of the project, Al Hooper reflected on some of the differences and problems of carrying out an undertaking 2,500 kilometres away and in such a remote location. Because the original 25 meter pool was installed in somewhat doubtful soil conditions, it had subsided at one corner and caused the old scum gutters to be almost ineffective. The geo-thermal and subsequent engineer's reports called for stabilization of the existing shell and the spraying of a new concrete tank inside it. The top half of the walls had to be completely demolished to allow for the addition of a new wet deck type system. The demolition, steel fixing, concrete onsite work was done by Al Hooper's usual crew sent from Sydney. Peblecrete application was done by subbies from Townsville, tylers were from Mount Isa, and Project Manager, Chris Smith worked with Sid on all general labouring.

Since the nearest concrete mixing plant is at Mount Isa, 250 kms to the West of Julia Creek, a temporary plant was set up on a council owned site, adjacent to the pool.

According to Al, the installation of the new tank was a fairly straightforward affair, when compared to the difficulties of applying the pebblecrete interior and tiling. Not the least of these is the average daytime temperature in that part of Australia. Julia Creek is located 140kms East of Cloncurry, where the Nation's highest temperature (now disputed) of 53°C, was recorded.

Last November, when the bulk of his work was being carried out, the low humidity and average daily temperature of 37- 39 meant that much of it had to be undertaking at night under flood light. As all pool builders know, however carefully a job is planned and no matter what allowances are made for things which may be required, there are always times when some usually small item is urgently needed. With the closest major building suppliers being in Mt. Isa, the acquisition of some special tool or material involves a 6 hour return trip.

Although the original filtration plant was kept on the new pool, considerable modifications and additions were necessary for the operation of the wet deck system and 'fun park' area of the complex, which included water cannons, a sheer descent water fall and a fountain.

The subject of successful water treatment of a pool in this location also offers its challenges Julia Creek is situated immediately above the centre of the Great Artesian Basin, which offers an unlimited supply of subterranean water from only 50 metres or so below the surface. It is difficult to appreciate when driving through the this most arid part of the Australian continent that a whole ocean of water is just a few metres underground.

Although the supply of water is endless, it is extremely high in minerals and dissolved solids and rises with a temperature of around 40°C.

This is why most buildings in town are equipped with a heat exchanger (working in the reverse of a normal pool heater) or a cooling tower. The higher ferrous content of the water requires among other things, regular removal of iron stains to surface finishes and fittings.

Despite these challenges, the pool was completed and officially opened by Queensland's Premier on December 17th 2009.

In addition to provide the town's residents, particularly the 70 or so students of the local school with a brand new water sporting feature.

It is interesting to note one of the first activities included a programme introduced by pool's Manager-Chris Smith, of a learn to swim campaign for the area's 'School of the Air' students. This involved flying in children from remote cattle stations up to 300 kms from town, for an intensive 2 day basic swimming course.

According to a spokesman for McKinlay Shire Council, the upgraded pool has done so much for the town's tourism industry. Julia creek is a small community with a population of 500 or so residents. Although it is situated on the main 'grey haired Nomad' and family holiday route from Queensland's Far North Coast, there was little to entice visitors to more than a one night stay at the small caravan park. The spokesman pointed out that during the tourist season, the park would be full to overflowing by 6pm, but by 10 am it was almost empty. The renovated pool and water attractions has done much to induce visitors to stay over for a longer period, much to the pleasure of the small town's few businesses.