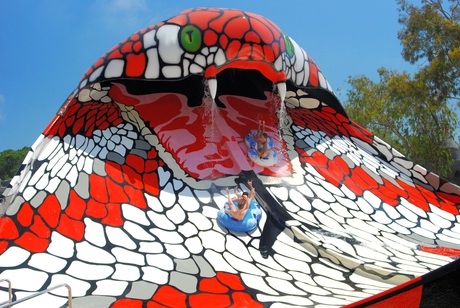 Polin Waterparks has received a Silver Award at the Istanbul International Inventions Fair for its King Cobra waterslide. The waterslide took out the award “in recognition of excellent and creative efforts to invent King Cobra”.

An annual exhibition focused on patents, inventions, new products and technical ideas, the fair is organised by the International Federation of Inventors’ Association. Four major awards were announced at the fair in 22 technical categories.

“We recognise the amazing diversity of products that were on display at this event. For Polin to be singled out with this unique recognition — well, it’s a great source of pride to us. The talent of other firms’ innovative efforts was evident everywhere,” said Ali Cansun, R&D director of Polin.

Polin says its ride is the first in the world to have theming built directly into the attraction — a feature for which the company has a worldwide patent. The ride’s core feature is a configuration that enables two double tubes to race through a circular path before experiencing an 8 m drop through the ‘valley of the Cobra’, where riders reach speeds of up to 51 km/h. Fog, a high-pitched hiss, water spray and other visual effects add to the experience.

The King Cobra waterslide has won a number of awards, including Europe’s Best Waterslide from 2012 to 2015 in the European Star Awards.