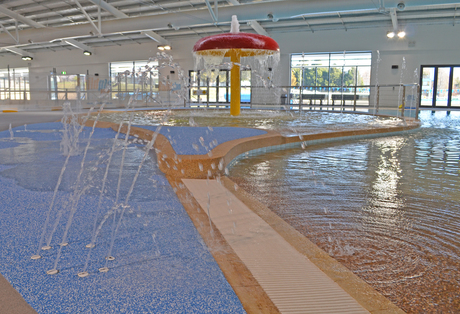 The Orange community, particularly the local swimming enthusiasts, had been campaigning for an upgraded pool in Orange for some time. Over the years proposals took many shapes, but essentially the hope was for an indoor pool that would enable swimming all year round. Orange’s harsh winter climate made that impossible with an outdoor pool, even though water in the original 50-metre pool was heated.

The City of Orange had enjoyed an older-style outdoor pool that was opened in 1957. The complex had been upgraded at different intervals to eventually include two smaller children’s pools. The campaigning of the locals was eventually successful with council signing off on a new aquatic centre.

When considering the design of the aquatic centre, the key requirement was for an indoor 25-metre pool built to FINA standards, which would allow for year-round swimming and the hosting of regional swimming competitions. (FINA is the international governing body of swimming, diving, water polo, synchronised swimming and open water swimming. FINA sets the rules and standards for both the sports played in pools and the pools themselves.) The 25-metre pool would be used for swimming training, so a wider 2.5-metre lane width was chosen, which also conformed to FINA competition standards. It was recognised that the centre also had a social function for spectators, so space for a cafe and a light commercial kitchen was also required.

The indoor pool would be used by people with a range of access needs, so a 20-metre-long sloping ramp was also incorporated as part of the design.

Allan Reeder, Communications Officer at Orange City Council, said the team had faced several challenges in the planning stages of the new centre. “A key challenge at the design stage was the decision not to build the new centre on a greenfield site. The pre-existing 50-metre pool had been built during the 1950s on a central location in Orange, so there were advantages to building the new pool at this location. The choice of location on council-owned land also eliminated additional real estate costs.

Another challenge was the size of the budget. There were preliminary indications that similar projects were costing as much as $10 million. Federal funding was allocated at $3.6 million. The final cost was $8.2 million.

As well as the 50-metre pool, there were also two smaller children’s pools on the original site. There were difficult decisions about how best to incorporate these structures into the new design. After a number of alternatives were considered, the decision was taken to incorporate the new 25-metre pool and an existing children’s pool inside the new aquatic centre building and leave the pre-existing 50-metre pool in an outdoor location.

The chosen site was on a sloping block, which had to take into account a number of established street trees and was also on a location where the water table was at ground level. These factors produced key challenges to designers. The installation of a drainage system to minimise the hydrostatic water pressures, expected to be felt by the pool, was a key element of the design.

Following a competitive tender process, which also involved routine business reference assessments, a Melbourne-based suite of designers was appointed to work on the aquatic centre project. Greenway Hirst Page was appointed as project designers. They also worked with Jackson Architects, a firm with experience in designing major sporting facilities. David Powick and Associates were the pool designers.

The National Buildplan Group was appointed to construct the pool with construction beginning in January 2011 and completed in August 2012.

“The construction of the 25-metre pool to exacting FINA measurement standards produced challenges during the construction phase. The expertise of city council engineers and independent consultants was tested when a number of tiled surfaces had to be replaced in order to meet very precise measurements of the pool’s width and depth. A number of solutions were developed to ensure adequate concrete cover and protection for the pool’s reinforcing steel,” added Reeder.

According to Reeder, since the pool opened it has become clear that an additional control panel, which controls water temperature and air temperature, is required. “Currently these controls are in the main plant room, some distance from the area where the staff are usually working. The team intend to install remote-control switches, which will let these factors be managed from a more practical and convenient location.”

“The incorporation of a pre-existing children’s pool into the new centre produced a problem related to earlier maintenance of that pool. The replacement of a tiled surface in this revamped leisure pool with a painted surface was not successful. This pool had to be drained again for the painted surface to be replaced,” said Reeder.

From a marketing perspective, pool managers are now addressing the challenge of turning around the public perception of swimming in Orange as a summer-only activity. Media coverage, advertising and raising awareness through social media are being used as tools in this challenge. In one targeted winter promotion, a free family pass is being offered as a ‘Player of the Week’ prize to each junior soccer team in Orange.

“The new Orange Aquatic Centre is a fantastic new centre for the people of Orange,” said Reeder.

The pools and facilities featured at the new Orange Aquatic Centre include: