Hanovia UV brings in the bubs at Eltham Swim School 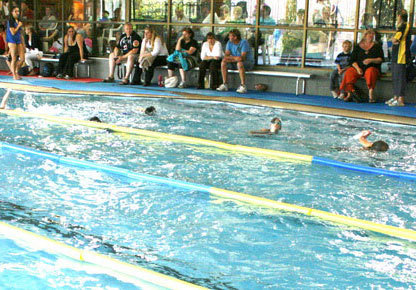 Kevin Fitzpatrick, owner and proprietor of the Eltham Swim School in Eltham Victoria, couldn't be happier with the difference his Hanovia UV system has made to his business. "Since we installed our Hanovia UV system a little over twelve months ago, we have experienced a 30% increase in registrations in our "5 and under" class. Once word got around that our pool water quality was far superior to other pools, we have seen a steady stream of new parents enrolling their kiddies."

Everyone associated with his school has benefited from the new UV system supplied and installed by Fluidquip Australia. Staff and parents have commented on the freshness of the water and air compared to other indoor pools. One parent recently approached Kevin to ask "How can your pool water be so much better than other pools?" Kevin explained that his UV system largely removes the harmful chloramines (otherwise known as "combined" chlorine) that accumulate in all indoor pools. These chloramines are responsible for the awful smell and sore eyes that are often associated with indoor pools. Once the parent learned the secret of Kevin's superior pool water, she went on to tell Kevin "I'll be telling everyone I know to come to here!" That of course was music to Kevin's ears!

Prior to the introduction of the UV system, weekly "super chlorination" and nightly "shock" chlorination was required to keep pool chloramines at bay. Even after these measures, chloramine levels remained higher than Kevin wanted. Virtually as soon the Hanovia UV system was commissioned, chloramines levels dropped dramatically - well below the levels Kevin was able to achieve previously. "Super chlorination has become a matter of history for me since we installed the Hanovia UV system." Kevin has also reduced the free chlorine level in the pool because chloramines are now controlled by the UV system rather than elevated levels of free chlorine.

From a business perspective, the UV system has provided Kevin with significant opportunities. "Prior to the UV, I would close the centre for 48 hours a week to conduct super chlorination. Now I have the opportunity to open 7 days a week if I wish to." The UV and the associated chemical control system installed by Fluidquip Australia also significantly reduce his OH&S risk. This is because Kevin and his staff no longer need to manually handle pool chemicals. "Not only is our pool water now of excellent quality, it no longer requires manual intervention (in the form of chemical addition) to keep it that way."

Having been in the swim school business for 29 years, Kevin is also very complimentary about his relationship with Fluidquip Australia. "Fluidquip are fantastic" says Kevin. "I have been in the swim school game for a long time and I know when suppliers are being less than honest. One of the things I really like about Fluidquip is they are very honest and genuine to deal with. Right from the start Fluidquip presented very well as a company. I was very confident they could offer me the personalized service I was looking for. They have certainly lived up to this, providing me with prompt service whenever I need it."