Fremantle Leisure Centre gets into hot water with Evoheat 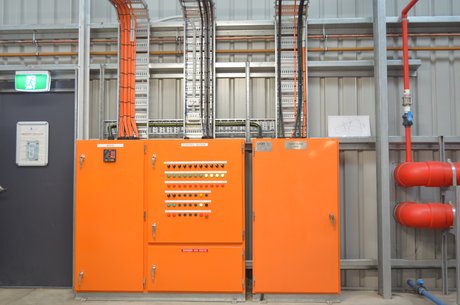 Having a policy of carbon neutrality, the City of Fremantle naturally researched low-carbon options when upgrading the pool heating system at the Fremantle Leisure Centre. It eventually settled on a solution that is the first of its kind in Australia: a cogeneration system plus a shallow aquifer geothermal heat pump.

Pool heating specialist Evoheat won the tender to supply and install both the water-to-water heat pump for the geothermal heating system and the cogeneration system.

The heating project was part of a 10-month, $5 million overhaul of the centre, which includes a geothermal heating system, cogeneration plant, resurfaced pools, a new aquatic playground area and access ramps to all pools. The project received $356,048 in Community Energy Efficiency Program funding under the Clean Energy Future program 1.2: Improving Australia’s Energy Efficiency.

The new heating system is anticipated to reduce carbon dioxide emissions by 250 tonnes each year - a reduction of about 25%. While the total amount of energy required to heat the centre’s pools will remain the same, it will now come from cheaper sources that produce fewer emissions. The cogen system is expected to supply about 273 MWh of electricity annually and approximately 390 MWh of heat per year. 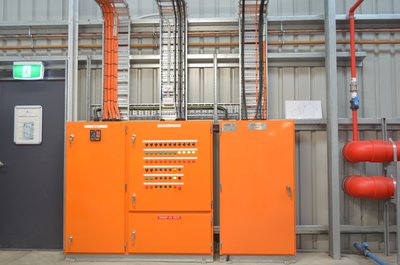 The new mechanical services switchboard in the plantroom.

A 350 kW EVO water-to-water heat pump draws water from the Leederville aquifer 250 m below the ground. The water, which exits the aquifer at around 27°C, is passed through the heat pump and then re-injected back into the aquifer via a separate injection bore. The warmth harvested from the underground water is used to heat two of the centre’s swimming pools. The heat pump operates at an impressive COP of over 6.0 all year round, heating the pools efficiently.

The City of Fremantle was fortunate in that the water the bore yielded was hotter than expected, increasing the amount of geothermal heat energy recoverable from the system and improving efficiency.

Future plans to build another pool at the centre required the hole drilled for the bore to be larger than is currently required to heat the existing pools. The bore can produce 18 L/s but will only use 12 L/s for the time being. At current tariffs, the anticipated cost savings are $110,000 per year, according to Greg Benvenuti of engineering firm Energy Made Clean (EMC). This gives an ROI of around 7.3% - but Benvenuti says this would have been higher had a bore with lower flow rate been drilled. 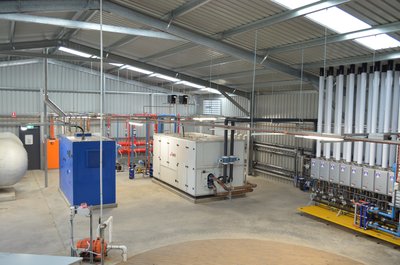 A number of pools in Perth have used aquifers approximately 1000 metres deep; however, the City of Fremantle opted for a shallow bore as it greatly reduces both risk and capital outlay. While the drilling undertaken for this bore is a fairly standard process, the key difference for this project is the requirement for the water to be injected back into the ground after the heat is extracted.

“This is not performed very often, and this is where technical difficulties can arise. Basically, the ground is usually happy to give up its water, but doesn’t like taking it back!” said Benvenuti.

“There needs to be a substantial amount of control to ensure that when injecting the water you don’t clog the injection hole up. If this happens, it is very expensive to fix.” 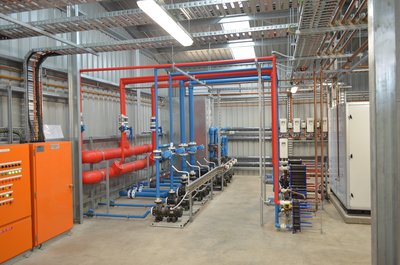 Heating system manifolds, pumps and plate heat exchangers for the 25 and 50 m pools.

To complement the geothermal heating, a cogeneration system was also installed. Evoheat supplied and installed an EVO MiracleGen CHP (combined heat and power) system that will generate 75 kW of electricity for the facility and 120 kW of heat for the pools. The cogeneration system’s Cummins gas engine will be serviced and maintained by Cummins once every two months. Its long service life means it is expected to operate for 10 to 15 years before it requires a major overhaul, according to Evoheat’s Travis McNeill.

The heat pump is also relatively low-maintenance, requiring just an annual inspection. It has a projected 25-year service life.

Both the CHP and the heat pump operate through an advanced Building Management System (BMS) on the COMAP controller of the CHP unit. The COMAP controller diverts 100% of each unit’s heating capacity to either the 50 or 25 m pools via Siemens three-way valves.

The COMAP BMS system can be monitored remotely via PC or smartphone from anywhere in the world and allows for a centralised control console, which can be monitored by a single staff member. 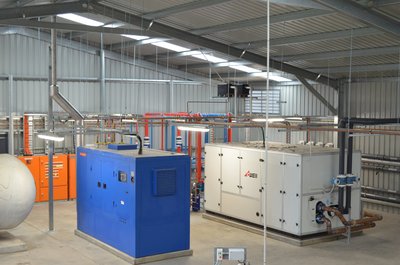 View of the CHP, heat pump, heat exchanger and plumbing and electrical.

Evoheat worked with a number of subcontractors on the project: Ian Payne from Swiftflow Plumbing took care of the pool and mechanical plumbing; Daniel Hyde from Greenstate Electrical took care of the electrical and controls aspects of the project; Rónán McErlain from ComAp also worked on the controls; and Andrew Ogden from Western Irrigation was responsible for the bore installation.

Both City of Fremantle and Energy Made Clean representatives say they were more than happy working with Evoheat on the project. Benvenuti says the plant delivery and installation went largely to schedule and to plan, and the company is happy with Evoheat’s performance.

“This is a bespoke, cutting-edge project - for Australia in general, let alone a local council,” said City of Fremantle Asset Manager Sam Bryce, who managed the project.

“We’re very happy with the result. Everyone worked well together and it’s because of this collaboration that it was such a successful project.”