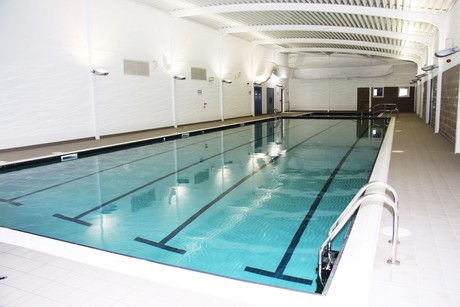 Situated on the River Dart beside the Devon coastline, life in the town of Dartmouth revolves around the water. As such, swimming is a vital skill for its residents.

However, the town lacked a community pool for year-round learn-to-swim classes and recreation. In late 2016, following many years of the community working hard to raise funds, a 25 m indoor pool was built and opened to the public.

“There are people here who have contributed to the swimming pool fund over the last 50 years. For a coastal town, it is essential that people learn to swim and feel safe and confident, both working and taking part in activities on the river,” said the Mayor of Dartmouth at the pool’s ‘topping out’ stage.

“We will soon be able to ensure that our young people get the opportunity to swim all the year round. Dartmouth town is proud to be part of this development.”

Local pool specialist Westcountry Leisure was engaged to build the pool. Knowing how much of the community’s hard-earned cash had gone into making the pool a reality, the company selected the most energy-efficient products on the market to minimise running costs. For filtration, the company selected OC-1 filter media, which works using settlement as opposed to the traditional method of entrapment.

By replacing commonly used media such as sand and glass with OC-1 media, it is possible to reduce the head loss in the filtration system, filter with a constant flow (regardless of debris entrapment) and significantly reduce energy costs, as it can be used with a smaller pump or a variable speed pump or controller.

To make the most of this media, OC-1 should be used with an inverter. On an existing system where it replaces sand or glass, the space that OC-1 frees up reduces the head loss in the system, allowing the pump speed to be dialled down while maintaining the exact same turnover and velocity as before. According to the company, this usually results in an approximately 20% reduction in the pump speed, giving more than 40% reduction in electrical consumption.

Speaking just prior to the pool’s opening in December 2016, Gilpin said, “Of course the system has still to be fully tested when the pool opens to the public, but so far I have to say I am hugely impressed. OC-1 has reduced the pump current and running costs dramatically.

“To be honest, I am amazed at just how efficiently it does work and the results it achieves. I think it justifies the title of a revolutionary product.”

OC-1 is exclusively distributed in Australia by AstralPool.