Every day's a Sunday at inner-city pool 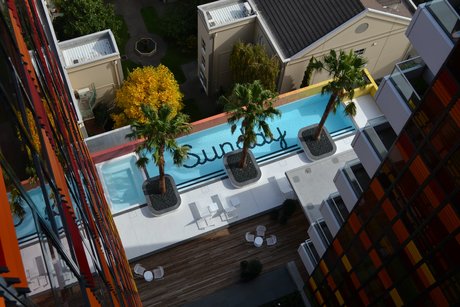 Completed in March 2013, the $100 million, 15-storey Sunday Apartments, located in Southbank, Victoria, were constructed to offer the best of inner-city living. On level three of the complex, which features more than 200 residential apartments, is the ‘Podium,’ an entertainment area for residents that includes an impressive pool and spa, covered and open cabana seating areas, BBQ zone, open-pit fire and ‘tranquil’ zone.

The design concept was by architect and interior designers Woods Bagot and Premier Capital Developments. The project managers were Flagship Property Holdings, while construction of the pool was completed by both Watpac Constructions and Commercial Aquatics Australia.

Flagship Property Holdings’ brief for the pool area was to create a space that can cater to many groups of people while they still maintain a great deal of privacy and sense of personal space. Woods Bagot achieved this by introducing a 10 m-wide central atrium, connected by a podium to create a ‘H’ profile. By cutting a central courtyard into the mass of the building, the apartments have transformed from a ‘box’ to a place with a unique sense of home for every resident. This atrium was the perfect place to position the pool, spa and entertaining area.

The landscape design was carefully considered and executed by Jack Merlo. Unlike anything else in the Melbourne CBD, the landscaping complementing the Sunday Apartments’ pool is reminiscent of the pool areas you would find at a high-end holiday resort. The pool and spa are built around three large palm trees, which are planted in individual concrete structures and form the pool surrounds. The project allows uninterrupted views of the city skyline - a unique backdrop in which to enjoy a swim.

The pool filtration system was located directly below the pool in the level two car park. The head height was limited in areas, which forced some creative thinking to ensure an optimal layout for the pool operators.

The pool cover was designed and fabricated by Sunbather. Due to the unique design of the pool and spa, considerable thought was placed on the design to ensure optimal performance. The cover is mounted onto a single roller, to simplify the use for operators, and stored in a stainless steel cabinet away from pool patrons.

The pool is operated by two Hoffman controllers, which control both chlorine and pH levels.

The pool and spa have been finished internally with white and black mosaic tiles with the word ‘Sunday’ tiled into the bottom of the pool. This feature makes a bold statement and can be seen from the top floors of the building. The pool edge has been tiled in yellow and red mosaic tiles to complement the use of red and yellow colour splashes around the pool, in the windows of the building and in the surrounding outdoor furniture.

The pool was awarded with the SPASA Victoria 2013 Commercial Pool of the Year Over $250,000. Additionally, Woods Bagot has recently won the Multi-Residential category for Sunday Coventry Street Apartments in the Interior Design Excellence Awards (IDEA) 2013.