With such large volumes of water, it’s little wonder the resort’s maintenance team was faced with a number of challenges trying to maintain the pools and spas.

“The pools would often be cloudy, and the time taken up by the maintenance team to keep these pools running was very high,” explained Nick Briscoe, inventor of the Hydroxypure system. “The chlorine levels had to be run very high in order to achieve clear water.”

Additionally, all the water areas were running salt chlorinators, which required regular maintenance.

A particular issue was the children’s pool, which consists of three separate bodies of water - Mushroom Waterfall Pool, plunge pool with water slide and spa, and the entry water feature. 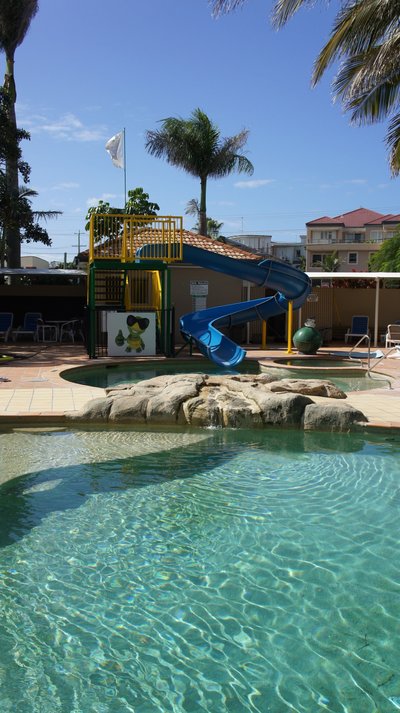 “The reception area is located between the kid’s pool and the water feature, so the first thing you would notice on check-in to the resort would be the strong smell of chlorine.”

The Hydroxypure system mimics the natural cleansing cycle of the environment to control bacteria. By using a combination of hybrid ozone and hydrogen peroxide, effective bacterial deactivation occurs, with the only by-product of this reaction being H2O. 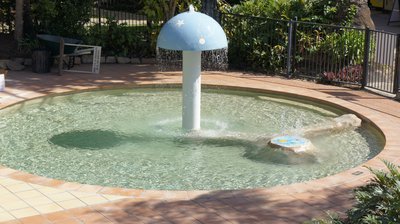 “Stephen could see all of the benefits of having a chlorine-free system running in the children’s pool, and he was particularly interested in the fact Hydroxypure has the Sensitive Choice endorsement,” said Briscoe. “He was also interested in the fact the commercial system is remotely monitored and automated.”

However, Nick says the resort was initially very sceptical that it would work and that it would be approved for use by the local authority (Gold Coast City Council).

Council was briefed on the Hydroxypure system prior to it being installed and it approved a six-month trial with a strict testing regime. The Hydroxypure system was subsequently retrofitted to the existing pool plumbing system in May 2013, but first the resort wanted to completely drain the pool and water feature and start again with fresh water in order to remove the salt. Additionally, the media filters were all changed to Waterco Glass Pearls in order to improve filtration quality. 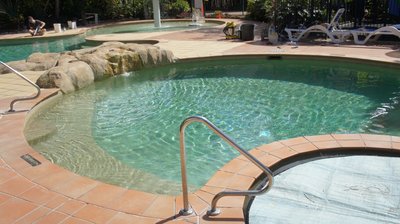 For the six-month trial, Waterco’s Hydroxypure system was installed to the front pool area, which contains the water slide and is the most popular pool area in the resort.

“Both the children’s pool and waterfall now don’t run on chlorine, and the rinse water from the backwash from the swimming pool is used to top-up and disinfect the waterfall,” Briscoe said. “A Waterco MultiCyclone plus an existing cartridge filter were also installed into the waterfall.

“And there is enough residual Perox sanitiser to maintain clean water with constant filtration on the water feature. In addition, the waste water from the backwash cycle on the filters is now being used in the resort. And the trees and bushes are growing much faster with the use of the highly oxygenated water!”

Changing to Hydroxypure has meant no chlorine odour on entry to the resort, and as part of the process a large amount of water has been saved due to the installation of four Waterco MultiCyclones, which are key components of the Hydroxypure system. Backwashing frequency and duration have also been reduced. 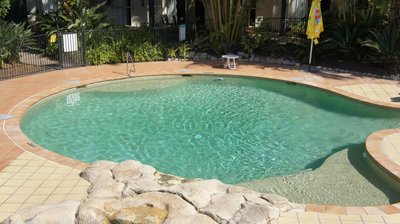 According to the resort, the children’s pool now has a lot more traffic than previously, it’s consistently clean and the time spent maintaining the pool is significantly reduced. “Plus the maintenance staff have noticed most of the kids using the pool have ditched their goggles,” Briscoe added. “Some of the comments relate to the positive effect on children with asthma and sensitive skin.”

In February 2014, the Hydroxypure system was deemed to comply with the Gold Coast Council’s requirements and is permitted for ongoing use at the Turtle Beach Resort. The system will require quarterly bacteriological water-quality testing to ensure that bather load, weather conditions and future development of components and/or chemicals validates the results witnessed during the six-month trial.

All of the Hydroxypure-treated wastewater is re-used to either irrigate the gardens or fill water features. Briscoe says this delivers a cost benefit, as it costs more to discharge this water to the sewers than the original cost to purchase the water from the water grid. Enhanced water conservation has also been achieved with fewer backwashing cycles required due to the function of the MultiCycline pre-filtration device.

Plans are currently underway to extend the water recycling program throughout the resort, with holding tanks to be installed so wastewater can be used on demand. Based on the water-management efficiencies the new system has brought about, Turtle Beach Resort expects the return on investment of the Hydroxypure system will be achieved very quickly.

Since the trial, the Hydroxypure system has been installed in Turtle Beach’s recently opened splash zone. The new $1 million splash zone features four water slides, two toddler slides, water cannons, a giant dumping bucket and a big screen television. The resort also plans to convert the rest of its pools to Hydroxypure.