The other solar pool heaters 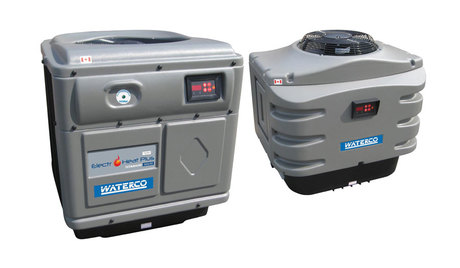 Now that the Carbon Tax has come into effect and many of us are feeling the pinch, it's crucial we consider ways of saving money for customers. One option is heat pumps, which are coming into their own and proving to be an efficient method of pol heating.

It's a technology that harks back to the 1970s when two engineers were seeking a solution to heat a pool at a fraction of the cost of a conventional gas heater. But it has only been in the past five years or so that heat pump technology has significantly evolved - and Australian pool owners have begun to realise the myriad benefits.

"In that time there has been a number of key developments in heat pumps," says Bryan Goh from Waterco, whose heat pump division has been manufacturing heat pumps since 1986. "Major enhancements have been the lowering of noise levels, enhanced, higher efficiency ozonefriendly refrigerant, and greater durability."

Heat pumps work like a reverse-cycle airconditioner by extracting ambient heat from the atmosphere, which is then transferred to the pool water. A highly efficient, low-cost option, heat pumps come in a number of different sizes ranging from 2kW to 200kW output. And compared with gas heaters, heat pumps can save you up to 80 per cent over LPG and 50 per cent over natural gas.

"It's a different 'type' of solar pool heating," says Adam Shelley, product manager with Zane Solar & Heating (part of the Waterco group). "Depending on the time of year, three to seven times the heat energy can be absorbed from air, compared to the actual power consumed. It means the new-generation heat-pump pool heater is very efficient and the heating costs are much lower than with gas pool heaters."

"And with the massive increases in electricity prices around Australia, it stands to reason that there's more interest in energy-efficient pool equipment such as heat pumps," Adam says. "And the great thing about heat pump systems is that they are not weather dependent and can be operated throughout the year."

He says heat pump sales in Australia are improving due to better market acceptance of the technology. "Obviously heat pumps are cheaper to run compared to gas heaters, plus they don't require gas connection or supply. If a single-phase heat pump is being installed, they are cheaper and quicker to install."

"They're also being purchased as an alternative to solar pool heating," Bryan says. "They can still heat a pool on a cloudy day, as they're not dependent on sunlight, but rather on ambient heat. Therefore they can guarantee a heated pool better than solar heating."

"Not only that, but because photovoltaic cells are taking up more and more roof space on houses, there often isn't enough room for the installation of solar absorbers. Therefore, the only other cost-effective way of heating the pool is a heat pump," Bryan says.

Heat pumps are available for both in-ground and above-ground pools and should be sized according to the pool's surface area as well as the difference between the pool's water temperature and the average air temperature. Wind exposure, humidity levels and night temperatures can also affect the heating load of an outdoor pool.

The energy efficiency of heat pumps is measured by the coefficient of performance (COP) and ranges from 3.0 to 7.0, with seven being the maximum. This measurement refers to the relation of electrical energy input and the amount of heat output. (Currently, there's no standard testing regime in place).

"To give a simple comparison, a common electric immersion heater (such as in a kettle) is around 90 per cent efficient, so would have a COP close to one, while heat pumps can be rated with a COP of five, which means an efficiency of 500 per cent," Adam explains. "This is because heat pumps don't actually create heat (like an immersion heater does); they just move it from one place to another."

"When comparing different brands for efficiency, it is important to make sure the COP is calculated under the same conditions for each pump. Of course not all heat pumps are created equal so it's important to do thorough research and take into consideration your particular needs."

How suitable is solar?

New research from the VTT Technical Research Centre of Finland suggests that while solar power...

They say an ounce of prevention is worth a pound of cure, and this is particularly true of...

From 'no gear and no idea' to industry expert: John McKenny

A regular contributor to Pool+Spa, John McKenny is a well-known face in the NSW pool...

Robotic recycling system could save soft plastics from landfill

Emmi brings carbon into mainstream finance — is this the end of greenwashing?

Pharmacogenomic approach to cure the pain of the 'burning man'