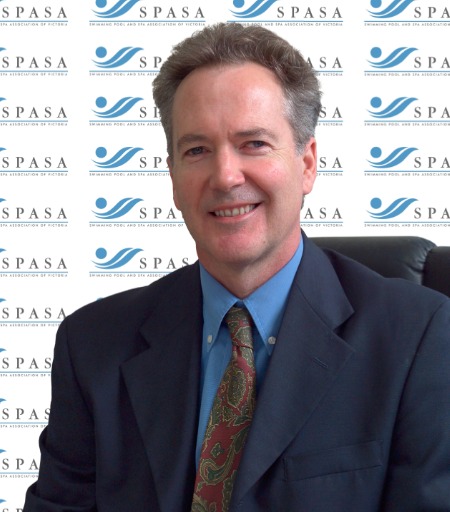 “Our fairly recent change of State government has led to a number of governmental inquiries and we now find ourselves in the throes of a significant review and reformation of our regulatory, licensing and consumer protection frameworks.

A great deal of change is likely to occur in the coming year. The association is fortunate to enjoy a strong relationship with government and our Building Commission, and see the likely outcomes to be a safer scenario for consumers and a more comprehensive platform for practitioners to operate within,” said Mr Watkins.

In July, the first Kids and Pools Safety Summit was hosted by Planning Minister Matthew Guy in response to the number of preventable drownings and injuries across Victoria.

Mr Guy said the Victorian Coalition Government is committed to introducing more effective safety requirements for pools and spas to enhance the safety of families and their loved ones in their backyards.

“Drowning is the most common cause of preventable death for children aged under five years and we have a responsibility to tackle the issue of pool fencing and safety generally.

“I have committed to undertaking further consultation and examine strategies to ensure pool and spa installations comply with the legislation and regulations.

“We cannot stand by and allow families to continue to be affected by something that can be addressed sensibly,” Mr Guy said.

Earlier this year the Victorian Swimming Pool and Spa Safety Committee (SPASA, Kidsafe, Lifesaving Victoria, the Building Commission, the Australian Institute of Building Surveyors & Municipal Association of Victoria) provided proposals to increase the safety of swimming pools and spas in Victoria. Mr Guy considered the proposals and established the Kids and Pools Safety Summit comprising a range of industry, stakeholder and government agencies.

Five key ideas were discussed at the summit:

Establish a pool register to enable the assessment of all domestic pools;

A targeted audit and compliance program;

An awareness campaign; and

Mr Guy said the views from the summit will be used to further develop and refine any proposed reforms and he thanked attendees for their enthusiasm and valuable input. Further consultation with government agencies and industry bodies will be required before any legislative change can be introduced.

Consistency is the key

SPASA Victoria proposed that the national body pressure federal government to harmonise Safety Barrier legislation. SPASA Victoria sees that the variation in State rules as being a real impediment to the understanding of what are already complex regulations. National consistency is the key to clarity.

Proposal 2: To lobby for a consistent Barrier Inspection process across all States. SPASA Victoria foresees that all States will eventually introduce some form of barrier inspections. Introducing several different systems - as is occurring now - will help nobody.

It will only magnify consumer confusion and unnecessarily increase costs to industry. The expense of producing several Stated-based Barrier Inspector Courses across the national is totally unnecessary.

The Victorian association has put to the SPASA Australia Board a proposal to lobby federal government to introduce a national database of all private pools and spas. Once compiled, this database should be utilised to maintain a consistent Barrier Inspection program. SPASA Australia should offer to maintain the register and provide a federally recognised Barrier Inspector course.

Brendan Watkins has taken the lead role in lobbying for the proposal’s acceptance.

“Every State association is equally passionate about reducing pool and spa fatalities. We all know that pools and spas must be compliant when handed over – yet an unacceptably large number fail the safety standard when inspected at a later date. Many pool owners clearly aren’t holding up their end of the bargain,” Mr Watkins said.

SPASA Victoria has provided a lawyer-produced template for members entitled “In the Interests of Safety”. This clearly articulates the issue at hand and alerts consumers to their legal responsibility to act.

Nobody wants to endure the nightmare that is a drowning. SPASA members must be strong advocates for safety.

Every pool and spa in Victoria requires a compliant safety barrier

In collaboration with the Building Commission, SPASA Victoria has also been strongly promoting clarity around older pools and spa barriers.

Some confusion has existed regarding retrospective barrier legislation. But the ongoing SPASA campaign has made it abundantly clear - there are no exceptions. There are no “loopholes”. All older pools & spas (even those built pre-regulation) must have a compliant barrier.

Regulation 5.13 of the Building Regulation (1994) required existing swimming pools constructed prior to 8 April 1991 to provide a safety barrier. This regulation commenced on the 1 July 1994.

Any new pool constructed after 8 April 1991 required a safety barrier in accordance with the BCA.

Mr Watkins advised that SPASA communicates frequently with the Building Commissioner and is optimistic that meaningful change will eventuate.