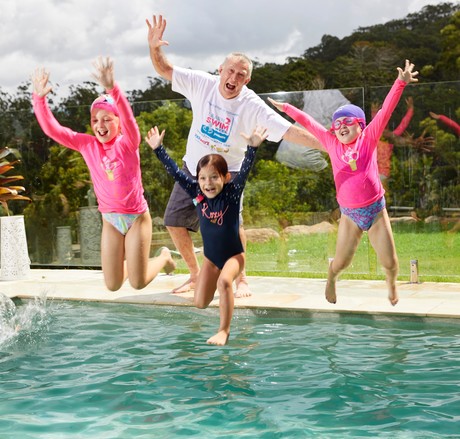 Poolwerx has recorded its most successful Learn2Swim Week to date, with 355 swim schools across the country participating to offer free swimming lessons for kids under five during the week-long event.

Now in its fourth year, the water safety campaign hit home with parents of under-fives, with thousands of Aussie kids learning water safety basics that could one day save their lives.

Poolwerx CEO John O’Brien said this year’s Learn2Swim Week had exceeded the franchise’s expectations, receiving widespread media attention and over 4000 website hits from parents keen to sign up their under-fives.

“Each year we continue to grow awareness of the campaign among parents of under-fives about the importance of getting kids into the water early to teach them water familiarisation and basic safety skills.

“Ultimately, our goal is to have zero drownings in the under-five age group,” he said.

“These campaigns are now long-term initiatives that are embedded within the business and are part of the Poolwerx culture of helping people have fun in the sun.

“Our Franchise Partners continue to be active supporters of the campaigns in their local communities,” he said.

Laurie Lawrence, Learn2Swim Ambassador and Kids Alive — Do The Five program founder, said he was heartened to see the Learn2Swim Week campaign grow each year.

“This year, we’ve had our most successful campaign and the water safety message is getting across to parents of young children.

“Last year we had 60% of parents involved in the campaign go on to enroll their under-fives in ongoing swimming lessons and we look set to exceed that this year,” he said.

The initiative is supported by all the major industry associations — AUST SWIM, ASSA ASCTA (Australian Swimming Coaches and Teachers Association) and SWIM Australia.